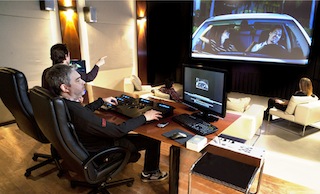 Qube Cinema has sold its digital cinema servers and DCP mastering software to Cinecolor post-production facilities in five Latin American countries. Each of the Cinecolor post houses – in Argentina, Chile, Brazil, Mexico and Columbia – now has a Qube XP-D server in its screening room for QC of its DCPs. Cinecolor Argentina and Columbia also use QubeMaster Pro for mastering DCPs. The DCP mastering and QC equipment enable Cinecolor to meet the growing demand for digital cinema post-production services in Latin America.

With a long history in film processing expertise behind them, Cinecolor, owned by Grupo ChileFilms, has surged into the digital cinema post-production market. Cinecolor Argentina, located in Palermo Hollywood, Buenos Aires, was the first company in Argentina to offer digital transfers from 35 mm film. It covers all the stages of post-production in one spot.

“Film’s place in cinema is disappearing and forty percent of the screens in Argentina are now digital,” said Mario Zambrino, technical director at Cinecolor Argentina. “Having an efficient digital workflow is imperative for us and that’s where Qube Cinema comes in. We use the Qube XP-D digital cinema server for our post processes and QubeMaster Pro is one of the tools we use to package DCPs.” 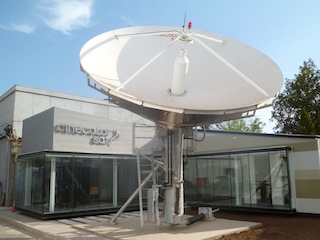 Cinecolor is the oldest post-production company in Argentina, and the biggest, handling negative development to make prints, offline editing, conforming, scanning and recording, VFX, color grading at 2K on a big screen and finishing in all formats for TV and feature film: 35 mm, HD and DCPs. It boasts the most experienced colorists in the region, from film and digital. The Qube Cinema XP-D servers and QubeMaster Pro enable the creation of d-cinema distribution masters (DCDMs) and DCPs for Cinecolor’s advertising and film work, following SMPTE guidelines.

“Most of our clients are making feature films and almost all of them are shooting digitally,” said Lucas Guidalevich, operations manager at Cinecolor Argentina. “The digital workflow is new for many directors and producers and we take them through all the steps. We work with the production company to find the best way for finishing their content.”

In addition to the studio in Argentina, Cinecolor has post houses in Brazil, Chile, Columbia and Mexico, all providing post services for the TV, advertising and film markets. There is a high level of cooperation between Cinecolor facilities.

“Cinecolor Brazil and Mexico have a similar infrastructure to ours,” Zambrino explained. “We all have film labs of various sizes. Brazil and Mexico make prints of feature films for their internal markets. Though the number of digital cinemas is growing rapidly, there are still roughly 500 screens that have 35 mm projectors. This means that we all continue to do a lot of release printing jobs, which we export to different regions of Latin America. We make prints of Disney films here for Argentina and other countries in the region."

Cinecolor Chile has a film lab as well as teleport for satellite transmission of digital content to the region. Operated as Cinecolor Sat, the satellite network is set up to distribute DCPs of feature films, trailers and ads directly to cinemas. There is a plan to install a fiber connection between Chile and Los Angeles, where most of the content originates. One decoder on the antenna is dedicated to transmitting DCPs. Another decoder enables distribution of live alternative content and ads to theaters. This should come in handy for the upcoming World Cup next year and the 2016 summer Olympics, both of which are being held in Brazil. 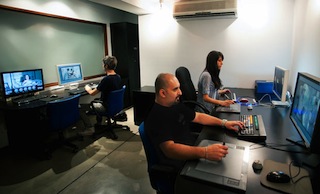 “Cinecolor Sat acts as a digital highway, transmitting content to the theaters connected to our network,” said David Trejo, director at Cinecolor Brazil. “The network has the flexibility to distribute local content throughout the region in substantially shorter times than physical distribution. This will generate revolutionary changes in programming and content distribution.”

Cinecolor Argentina started processing film more than 30 years ago and brought the first Telecine to Argentina in 1988. Even with the all-digital pipeline they’ve established, the creatives at Cinecolor continue to have a love of film. Cinecolor Argentina has a new department of digital restoration of older films, preserving the country’s cultural heritage using optimal technology. For preserving footage for historical archiving they make a film copy, while the movies destined for commercial exhibition are packaged as DCPs.

Despite its release printing and historical archiving work, Cinecolor Argentina sees the writing on the wall for film. Only two movies out of about 80 that were produced in Argentina this year were shot on film. The company’s post-production and distribution work will increasingly involve an all-digital workflow.

“We’re excited to be part of the growing market for digital cinema in Latin America,” said Eric Bergez, director of sales and marketing at Qube Cinema. “We look forward to working with Cinecolor throughout the region.”