This year the buzz at CineEurope seemed to be all about alternative content, or event cinema as it’s being increasingly referred to. As chair of the ECA it’s difficult to gain real perspective from the eye of the storm but having seen the business grow from an occasional add-on for exhibitors to a serious revenue stream in more recent years, the sense in Barcelona last month was that in event cinema, the possibilities are endless and the sense of real excitement was tangible. Everyone from major studios to major cinema chains to independents to technical partners seemed keen to know more, hear more, do more to exploit this established and still growing revenue stream.

Not that long ago – two, maybe three years - there was much rubbing of chins and puffing of cheeks in doubt as exhibitors and distributors alike struggled with various challenges; questionable content, technical delivery issues, poor marketing, tiny budgets, poor communication. Fast forward to 2013 and with the recent high profile success of the British Museum’s Pompeii in cinemas in the UK so far, the industry has emerged confident and slick, with high profile brands queuing up to capitalise on the exposure a theatrical release affords them. Event Cinema’s future seems more assured than ever before.

The big question concerned the future value of the market; is $1billion realistic? Opinion varied across the panel, but most were optimistic, though there was still a note of caution and Graham Spurling of [email protected] in Ireland advised that there is ‘no one-size fits all’ in this sector and every market varies hugely. Numbers at this stage in the game are all anyone is interested in and the ECA for its part is helping to provide some data but Spurling is right to warn against taking global figures too literally at this early juncture. 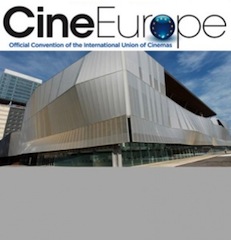 Over and over the term ‘series’ was being referred to and this seems key to making event cinema work for both distributors and exhibitors. Too often in the past both parties have given 100 percent in effort and financial outlay to a one-off project only for it to fail to break even at the box office. Wise to this now, content of all types is now being conceived as a series of this, a season of that, which easies the marketing burden and spreads the risk across multiple events. Happy days for both parties and if executed well the public can benefit by buying events up front and word of mouth marketing can take on a life of its own.

At the seminar ‘Event Cinema: Frontiers in Alternative Content’, the panel of exhibitors and distributors from the US and Europe offered an insightful glimpse into the diversity and innovation on offer in this sector now. Mariusz Spisz of Multikino in Poland explained that their Cinema in High Heels themed ladies only night provided an opportunity for clever advertising as well as sponsorship opportunities. Night of the Ad Eaters was also a novel concept involving six hours of non-stop advertising running throughout the night – incredibly this is hugely popular, an idea that germinated originally in France. Multikino, along with a number of other European cinema chains, have also had huge sell-out success with the recent Champions League finals, which is inspiring to hear given that in the UK sport has yet to really flourish in cinemas.

Not everyone was in agreement however. Thierry Fontaine of Pathé Live felt that flooding the market with content was counter productive and this year Pathé Live have reduced their releases from 38 to 26 titles this year, more in line with the output of a major studio and a more intelligent strategy.

He also felt focusing on exclusivity was key to the success of event cinema from an exhibition perspective. Drew Kaza of Odeon disagreed, adding that exclusives don’t work.  Someone in the audience went a step further, even considering this approach ‘cultural vandalism’. Many involved in the industry feel that event cinema is as much about democratizing art and making it available to everyone, so imposing exclusivity is viewed by some as robbing the general public of an opportunity to experience culture.

The industry is far from peaking yet and there are still challenges to face, not least those including subtitling for emerging markets, technical delivery for live events, marketing and more. Some of these are being tackled in part by the ECA but others are likely issues that a young industry is facing, that will erode as the market matures.

At its core, event cinema is about catering for your audience, knowing your customers, and marketing the content accordingly. Graham Spurling of [email protected] in Ireland summed it up succinctly: “If we can sell the British Museum live in Ireland then we can sell anything.”

Melissa Keeping is Digital Cinema Report's European correspondent and the founder and chair of the Event Cinema Association.