Creative Solutions has announced that Teradek has partnered with Frame.io to support Frame.io C2C (camera to cloud), a cloud-based workflow that bridges on-set camera capture with post-production NLE systems. This process is poised to forever transform the way in which production and editorial interact. 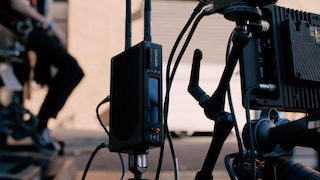 At launch, the Teradek Cube 655 video encoder will be the only device capable of capturing color-accurate proxy files directly from camera video feeds and uploading them into the Frame.io cloud system via WiFi, LTE, or 5G.

“Teradek and Frame.io engineers have been working together to integrate the two platforms and achieve seamless handover from the camera to the cloud,” said Creative Solutions CEO Nicol Verheem of their collaboration with Frame.io. “You just hit Record on the camera, and when you hit Stop the file shows up in the cloud.”

When connected with a C2C-compatible camera such as Red, Arri, and Sony, Cube 655 utilizes the camera’s Record Trigger to capture and store color-accurate H.264 (AVC) proxies in manageable file sizes, which exactly match the filename and timecode of the massive original camera files. When stop-record is triggered at the end of a take, Frame.io will automatically upload Cube 655’s proxy file into their cloud storage system via proprietary link over WiFi or compatible cellular modem–such as the Teradek Node LTE Modem.

As proxies are uploaded into the cloud at a continuous rate, post-production can generate dailies and editors can begin work on the NLE timeline just moments after the director yells Cut on set, from anywhere in the world. Because the recorded proxies are stored locally on Cube 655, productions are able to upload their proxies later, or continue downloads from the hotel room on a distant location.

“Teradek has been working with Frame.io for years to innovate new solutions and simplify collaboration in filmmaking,” said Greg Smokler, viced president of cine products at Creative Solutions. “This new ability to instantaneously upload proxies—from nearly any location—allows us to finally bridge the gap between production and post.”

Teradek + Frame.io C2C workflow compatibility will be available in March.