Kinepolis’ Jaarbeurs, Utrecht opens October 10 and will feature laser projection, RealD 3D and a MediaMation MX4D auditorium. This is the first of several Kinepolis based MX4D locations as part of a recent deal. 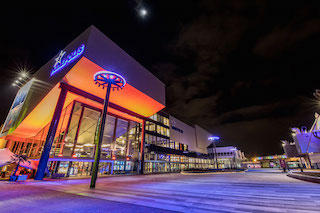 “This is the first location we have done with one of the greatest theater circuits in the world, Kinepolis,” said MediaMation CEO Howard Kiedaisch. “We look forward to more in several countries. Their cinemas are stunningly beautiful and on the cutting edge technologically.”

MX4D technology intensifies the movie going experience with full motion chairs, weather simulations and scents, impacting all senses. A patented armrest delivers additional effects to each seat, while the audience enjoys a truly immersive, yet communal theater going experience that is not available from home.

Fall and winter films to be released in the MX4D format include: Disney’s Maleficent: Mistress of Evil with Angelina Jolie, Frozen 2 and Star Wars: The Rise of Skywalker. Other upcoming films in MX4D include Sony’s Jumanji: The Next Level and Charlie’s Angels, and Paramount's Terminator: Dark Fate.