Cinewav's outdoor cinema audio technology has been granted a U.S. patent. Cinewav replaces other sound systems including FM transmitters or broadcasting in outdoor movie theaters, with a phone-based app. Users can simply watch on a large screen and listen on their phone via a small down-loaded audio file that syncs with the images displayed on the screen. 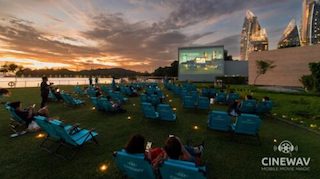 Users need the Cinewav app and their own headphones, while event holders need a Cinewav player on a laptop.

The app is the brainchild of Jason Chan and Christian Lee, who through BananaMana Films made the movie Jimami Tofu. During the film’s distribution process, Chan and Lee realized that their carefully mixed sound did not always have the desired effect on audiences, particularly at outdoor shows.

“When we were in theaters, we weren’t necessarily happy with all the stage sounds because theatres are balanced differently based on different hall sizes,” said Chan. “Then we realized that most audience members aren’t sitting in the sweet spot in the middle, where we want them to be. Then we thought, what if we could create a technology where everyone gets the same mix that we mixed, no matter where they sit, and that also applies to outdoor performances.”

Chan and Lee also realized during the process of releasing Jimami Tofu that for many of the shows they had done independently, an appropriate application would obviate the need for expensive audio equipment and bring almost any space into a cinema. They developed the technology themselves with a team and the operation was funded at $500,000 by angel investors.

The app has received approval from Hollywood studios including Disney and its brands and Sony Pictures.

“Disney was the first studio to let us show their movies through our system,” said Chan. He said Disney showed he and Lee what they had to do to verify that their encryption and security systems were satisfactory.

“They’re obviously always concerned about piracy,” said Chan. “The cool thing about Cinewav is that the movie lives in a single hotspot. You’re not streaming to all those devices. We’re actually less risky than most of the OTTs out there.”