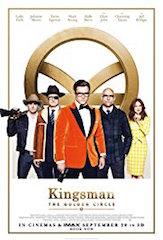 “We love giving our fans as many options as possible to enjoy our films and ScreenX is definitely a great way to see a movie,” said Andrew Cripps, president of international film distribution, 20th Century Fox. “After the success of Kingsman: The Golden Circle last year, we look forward to continuing this partnership.”

In the past 12 months, ScreenX has seen a surge in the number of ScreenX installed auditoriums from 107 to 142, a 33 percent increase year-over-year. Additional screens are expected to be equipped with the technology across China, the U.S. and Europe in the coming year.

This includes a deal with B&B Theatres that will bring four new ScreenX locations to the U.S. through 2019, including one in Liberty, Missouri, that will be the largest ScreenX in the world.

“20th Century Fox remains an excellent partner for us as they are looking for new ways to push the boundaries of movie-going at the theaters,” said Byung-Hwan Choi, CEO of CJ 4DPlex. “We are thankful for their commitment to ScreenX as we look to expand the reach of this new technology, that we feel is going to change movie-going for the better in coming years.”