Box office hit, Venom, from Columbia Pictures, was among the first films to have its sound work completed through Sony Pictures Post Production Services’ expanded facilities on the studio lot in Culver City. Supervising sound editor/re-recording mixer/sound designer Will Files and his crew used a new theater-style sound design suite to create sound effects for the film, which stars Academy Award nominated actor Tom Hardy as both the alien symbiote Venom and its human host, Eddie Brock.

Bringing Venomsonically to life presented the sound team with both significant challenges and expansive creative opportunities. For starters, the alien symbiote appears in a myriad of forms. In isolation, Venom is seen as a slithering, gelatinous mass. Once it’s achieved symbiosis with its oxygen-breathing host, it becomes a muscular humanoid with bulbous eyes and razor-sharp teeth.

“When he’s in his natural state, Venom is something like a giant leech,” said Files. “He’s amorphous and has tendrils that allow him to move in any direction. There are several other similar creatures that arrive on Earth with him and we wanted each one to have a distinctive sound, a sound that would not only be appropriate to their visual appearance but would also give them a vocal quality. We wanted to suggest that they are moving and acting with purpose. They are sentient creatures, not just piles of goo.”

Files and his team began developing sound design concepts at the onset of post-production, while picture editing was ongoing. That allowed time for experimentation and gave the picture editors the advantage of working with custom sound elements. “I’m a big fan of starting the sound design process as early as possible,” Files said. “It gives more time to test sound concepts, because you don’t always get it right the first time. We send elements to the picture editors, they try them in their cut and provide feedback. It’s more creatively satisfying for the editors, the director and my team.” 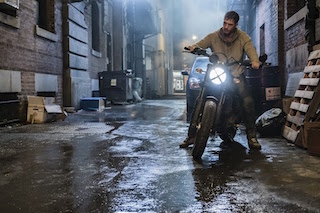 The sound effects that the team created for Venom in his gooey state were an amalgam of electronically modified real world sounds. “We recorded fish guts, food and lots of other slimy stuff,” recalled Files. “We blended that with more expressive sounds like animal noises and musical instruments. We even used a recording of a cactus being bowed like a violin. The combination has a weird stuttering quality that is perfect.”

When Venom achieves symbiosis with Brock, he gains a rough and looming voice, one that’s intelligible, but not quite human. To achieve that effect, Files’ crew augmented Hardy’s spoken dialogue with grunts, gasps and other guttural sounds. “We combed through Tom’s dialogue tracks and every time he grunted or made some other non-verbal noise, we’d pull it out and add it to a special library,” said Files. “We cross-pollinated those sounds with our goo effects to arrive at a voice that is a blend between Eddie Brock and Venom.

“We ultimately developed a complicated chain of effects that we could use to turn Tom’s voice into Venom’s. Once we had that, we were able to bring that process into ADR sessions. Tom would speak a line, and we’d put it through our Venom process. Tom could hear the result immediately and, if necessary, adjust his performance. That was pretty cool.”

The team produced a host of sound effects to support the physical actions of Venom’s brawny body and metal suit. They also supplied the soundscapes for the film’s many action scenes where effects ranged from speeding cars, trucks and motorcycles to military drones and other next-generation weaponry. For Files some of the most interesting sound effects were created for scenes showing the process of symbiosis or illustrating Brock’s struggle against the alien that has invaded his body. “We developed sounds to express Eddie’s experience of having another creature live inside him,” Files said. “Most of that comes from Tom’s performance, so our role was to enhance, but not distract. We added just enough sound to support what you see on the screen and finessed the balance to avoid overplaying it.”

The immersive Dolby Atmos sound environment, said Files, was perfect for the film’s high-pitched, but nuanced, action. “Kevin and I spent a lot of time carving the soundtrack, so each individual moment was well-defined,” he recalls. “We were very selective in what we kept in and what we left out, so that you hear one or two things at a time, rather than a mass of undifferentiated sound. In the end, I believe we achieved something that is very precise, exciting and fun to listen to.”

The result, says Files, is a film with plenty of thrills but also a surprising degree of emotional and psychological depth. “Credit for that goes to our director, Ruben Fleischer,” said Files. “The film is very high concept in terms of its characters, creatures and plot twists. Ruben had a strong vision and he inspired all of us to bring it to life.”