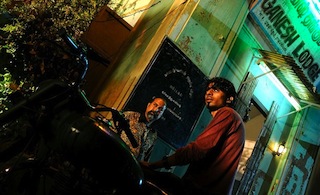 Vidiyum Munn, a dark suspense thriller by director Balaji K. Kumar, will premiere in theaters across India in Auro 11.1 by Barco. Kumar says he discovered the capabilities of Auro while watching Vishwaroopam, the first Indian movie to feature the new format.

"I'm convinced audio plays an important role in any movie. It can really change the dynamics and accounts for 50 per cent of the total experience," said Kumar. "During the post-production of Vidiyum Munn, I studied different alternatives for the 5.1 channel audio. Auro really stood out. I was impressed by the sound quality, its simplicity and the added value it brings to the entire cinematic experience."

Abel Garamhegyi, managing director at Barco India said, "Because the human being is driven by images as well as sound, we are aiming to reach perfection in both and completely immerse the audience. And it seems like we have succeeded: bookings for halls where Auro 11.1 has been installed are much higher. Auro 11.1 is proving to be a very powerful differentiator, motivating people to come together and enjoy an overall experience instead of watching their television sets at home."

"The system demands minimal hardware investments and achieves maximum results in 3D sound with a minimum number of speakers," Garamhegyi said. “On top of that, the platform is capable of supporting future immersive standards as they become available."

Sivakumar Vijayan worked as the audiographer for Vidiyum Munn. "Balaji K. Kumar wanted the sound of the film to be very dynamic, as it has tense moments throughout," explained Sivakumar. "It had to be an immersive soundscape, enveloping the audience from all directions. In mixing the film's audio and music, I used the Auro-Matic plug-in – a set of upmixing algorithms – quite extensively. Even after folding the audio down to 5.1, it gives you an impressive, enhanced result. I have been in the industry for twenty years and so far I never came across a plug-in capable of doing this. It made my job a whole lot easier and definitely added to the intensity of the scenes."

Vidiyum Munn is the first Tamil production by Kumar, a writer, director and visual designer. The movie tells the dramatic story of four men hunting down two women, each for their own perverse reasons. Kumar’s Twelve twisted tricks won the Golden trailer award in 2002. In 2007 he received a host of awards for 9 lives of Mara, a cult hit featuring Shakespearian plot twists and a film noir screenplay.

A gold medalist from Sathyajit Ray Film and Television Institute, Vijayan made his debut as a cinematographer in Vidiyum Munn. He also worked with P.C. Sreeram for a couple of years before Kumar spotted him as the right person to handle the camera for Vidiyum Munn.

"Naturally, we are extremely honored that this renowned crew has chosen Auro 11.1 by Barco to support their ambitious project," Garamhegyi said.