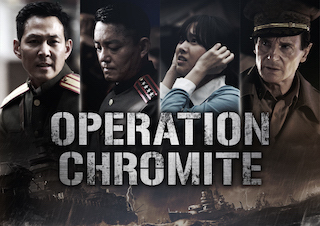 ScreenX has unveiled the feature films that will be released this year in the immersive multi-screen format. They include two Korean films and two Chinese films. Operation Chromite follows the heroic Korean soldiers who carried out a pivotal covert operation during the Korean War.  Liam Neeson stars as General MacArthur. Lee Jung-jae and Lee Beom-soo also star.  The film is directed by Lee Jae-han and produced by Taewon Entertainment. ScreenX will be utilized during the battle scenes as well as some of the other key action sequences. (July 2016)

Train to Busan, an action thriller in which passengers on a train from Seoul to Busan struggle to survive after a disastrous virus hits South Korea. Gong Yoo, Ma Dong-Seok and Jung Yu-mi star. Train to Busan is directed by Yeon Sang-ho and produced by Red Peter. When watching the film in ScreenX, the sense of space inside the train will be emphasized by the 270-degree view, and audiences will feel the movement of the train as the action progresses. (July 2016)

Call of Heroes 危成 is an upcoming Hong Kong action film produced and directed by Benny Chan, with action direction by Sammo Hung, and starring Sean Lau, Louis Koo, Eddie Peng, Yuan Quan, Jiang Shuying, with a special appearance by Wu Jing. The film is set in 1914 during the collapse of the Qing Dynasty and follows the story of a group of villagers who stand up to a cruel young warlord.  The fight scenes were shot in ScreenX giving movie-goers a full 270-degree view of the martial arts action. (August 2016)

Few Bullets (快手枪手快枪手) is set in the 1940s, when two Chinese snipers try to take back the royal seal from Japan. In doing so they travel to Manchuria, Shanghai, and Nanjing. For a Few Bulletsis directed by Anzi Pan and distributed by Wanda Pictures. Many of the spectacular landscapes and action sequences will be presented in ScreenX. (July 2016)

ScreenX is a multi-projection technology that extends the movie from a main screen onto the sidewalls of a theatre. By using all three sides the technology offers the audience an immersive experience. ScreenX also refers to a special auditorium using the technology. CJ CGV developed ScreenX in cooperation with KAIST. The multi-projection system is patented in Korea. The system uses six projectors per wall for a total of 13 projectors. According to the company, ScreenX is projector and server agnostic, though currently the digital cinema projectors are from Christie, the servers are from Hewlett-Packard.