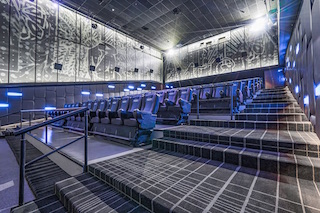 B&B Theatres has opened another MX4D auditorium, bringing the theatre chain’s total to six. “Our continued partnership with MediaMation proves our belief in MX4D,” said Brock Bagby, executive vice president of B&B Theatres. Situated on the Kansas/Missouri state line, Overland Park is the second largest city in Kansas with nearly 200,000 residents. The theatre also has the ability to draw from the nearby Kansas City metropolitan area, which boasts almost 500,000 peoples.

MX4D seats feature a full range of motion and effects to enhance Hollywood’s latest releases. Moving beyond standard 3D, they incorporate MediaMation’s newly patented EFX armrest, which allows for every customer to have a better communal experience across an entire theater. Additional atmospheric effects include wind, fog, rain, and strobes.

“Our theatres are created to serve movie lovers and thrill seekers who want a full and impactful movie going experience with audience participation,” said MediaMation CEO Howard Kiedaisch. We have been thoughtful in our growth and the new ventures globally and domestically are part of a greater vision that includes MX4D technologies as well as opportunities for immersive esports team gaming events and more.”