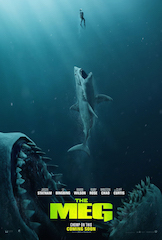 In the wake of the global success of Rampage earlier this year, Warner Bros. Pictures and ScreenX are releasing several upcoming titles in the format including September’s terrifying new installment in the Conjuring franchise, New Line Cinema’s The Nun; director James Wan’s epic DC action-adventure Aquaman this December; and the first standalone feature for beloved DC hero Shazam! in April 2019, also from New Line Cinema.

“We’re looking forward to delivering this exciting slate of films in the immersive, innovative ScreenX format, and thrilled to team up with ScreenX again this August to bring audiences face-to-face with the biggest, most dangerous predator of all time in The Meg,” said Thomas Molter, executive vice president of international distribution, Warner Bros. Pictures.

“Warner Bros. Pictures continues to be a strong partner, and we are thankful for their commitment to ScreenX as we look to expand the reach of this new technology, which we feel will change the theatrical experience for the better in the years to come,” said Byung-Hwan Choi, CEO of CJ 4DPlex. “As the number of titles available in this format continues to grow, along with our number of locations around the world, all parties – from exhibitors to moviegoers – will continue to benefit from the innovative ways we are working together to create unparalleled movie-going experiences worldwide.”