Digital Cinema Report has learned more details about LG’s entry into the LED Cinema Screen market. According to a company source, the screen does not yet have an official name but its model number is LAD033F. The company has not officially announced that it is entering the cinema market and, as such, is not making public statements about its screen. 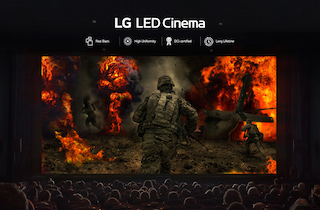 As previously reported, the screen is DCI-compliant. And, the LG LED Cinema Screen is compatible with Dolby Media Servers and Dolby Atmos sound.

According to LG, most cinema screens feature a DCI-P3 color gamut spec, but the actual colors that the audience feels may be different. LG LED Cinema says its screen accurately reproduces the colors intended by the content creator and delivers the DCI-P3 color more vividly.

Unlike standard projectors using a single light source, the LG LED Cinema Screen has LEDs emitting individually and offering uniformity of light. As there is no dimming and image distortion like fading, LG LED Cinema delivers a clearer and uniform image representation on the entire screen, the company said.

LED screens do not need a projection booth, which leaves more space for additional seating.

The LG LED Cinema boasts 100,000 hours of lifetime, the company said, saving time and cost for maintenance. It doesn’t require placement of parts like lamps as conventional projectors do.

Here are a few of the screen’s specifications:

Further details can be found on LG’s website https://www.lg-informationdisplay.com/product/led-signage/indoor/led-cinema/LAD033F