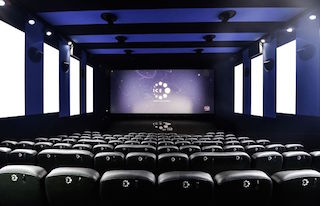 In the newly created role, Desmazures will lead ICE Theatres’ international expansion efforts and worldwide sales division. With more than 10 years’ experience in the media industry, Desmazures will be in charge of expanding the brand footprint and theatre development by identifying strategic partnership deals with exhibitors, distributors and manufacturers. Working with the revolutionary and profitable business model ICE Theatres offers to both distributors and exhibitors, part of Desmazures role will be to lead the strategy and fine-tuning of the offering according to each market specifics.

ICE Theatres technology features up to seven non-reflecting LED-panels flanking each side of the auditorium to fill the moviegoer’s peripheral vision with colors complementary to the front screen.  An in-house post-production team in La Rochelle creates ambient images for the panels and syncs them to each film showcased using this technology. In the past two years more than 52 titles have been screened in ICE Theatres from all major studios. In 2020, 17 titles have already been confirmed.

Desmazures officially joins ICE Theaters after working with the company in a consolatory capacity, to help secure two milestone international expansions in 2019 – both to Saudi Arabia with VOX Cinemas, and the opening of the first location in the U.S. at AEG’s Regal L.A. Live.

Previously, Desmazures held a position at Arts Alliance Media as its senior sales manager, where he successfully ensured the digital transition through the virtual print fee model throughout the European market and Latin American market. Over the past four years, Desmazures has been working as the co-founder of Bel Air Cinema, the world leader in providing day-and-date movies to high net worth individuals on board super yachts, royal palaces, private islands and residences.

“We are very excited to welcome Guillaume to the ICE Theatres team,” ICE Theatres. “Our first meeting goes back to 2007 when he did fantastic work on the digitization of our exhibition locations with CGR. We are starting an amazing new adventure: we have the right product supported by all the Major Studios, along with the right executives to drive ICE Theatres to all corners of the world.” said Jocelyn Bouyssy, CEO, CGR Cinemas Group.

“Being part of this new and fantastic adventure, supported by such a powerful and innovative theatrical exhibition group is a fantastic challenge for me,” said Desmazures.