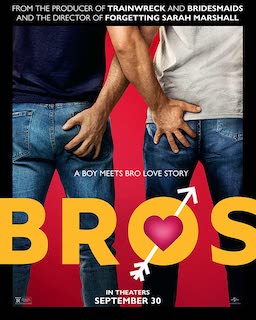 The campaign launches in cinemas October 28 and will run during all screenings of Bros across all of DCM’s network of theatres, which represents 80 percent of the industry.

Davina Barker, sales director, Digital Cinema Media said, “We’re really proud of this campaign, which brings together advertisers who have initiatives that support the representation of the LGBTQ+ community. At DCM we are committed to reflecting diversity and inclusion, and we are grateful to Universal, Billy Eichner and the Bros team for partnering with us on what is our biggest cultural intervention to date. Cinema creates cultural moments, and we hope that this important campaign connects with our audiences and helps create a lasting legacy for better representation in the film and advertising industry.”

In the ground-breaking spirit of the film, the ad reel will only feature content from advertisers aligned with the LGBTQ+ community, with brands including Rimmel, Virgin Atlantic, Pinterest, and Premier Inn. DCM has also offered part of the ad reel to shine a light on LGBTQ+ charities, with content from Queer Britain, the first dedicated National LGBTQ+ Museum featured.

The campaign is created to highlight the important role advertising plays in expanding diversity in the media landscape and driving awareness around inclusive, authentic brand values that inspire positive change in LGBTQ+ representation.

The ad reel will begin with a full takeover of DCM’s ident, combining DCM’s logo with footage from the film, before leading into an introduction from Billy Eichner, co-writer, star, and executive producer of Bros.

Eichner outlines the important role advertisers play in helping drive a positive change in audience attitudes and the responsibility to represent the diversity of their customers on screen. He explains how the specially curated ad reel is celebrating all the positive work featured brands have done to push the boundaries for the representation of the LGBTQ+ community in advertising.

Each brand spot will then run throughout the ad reel, interspersed with content created by DCM Studios, with interviews from Bros cast members about the unique casting decisions made for the film, what it means for them and the future of the industry.