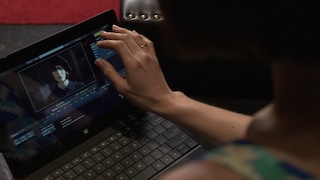 Scratch Play-supported formats include, but are not limited to:

The heartbeat of Scratch Play is the Construct, also found in Assimilate’s Scratch Lab and Scratch Lab professional toolsets. The Construct is a visual map to media that starts with a basic timeline, and evolves to resolution and format-agnostic version control. The Construct can contain any combination of different formats, resolutions or color spaces, including REC 2020, the new 4K ultra HD color space, all easily framed within a user-defined output resolution. Users can quickly switch between versions, compare with dual-view and wipe capabilities, or use multiple Constructs to more efficiently manage their media.

Scratch Play is the ideal tool for DPs and DITs to quickly review shots, pull stills, create looks and export CDLs or LUTs - without interrupting DIT cart transcodes. VFX artists can quickly review animations or renders in context: frame-accurately, at full resolution, with full color consistency, and even alpha channels. Even semi-pro shooters and hobbyists now have a free tool that they can use to review the RAW shots from their DSLR cameras.

“Scratch Play has been an awesome tool to use on set,” said Josh Diamond of The Diamond Bros, the New York City based producer-director team. “We use Scratch Play to pull stills directly from the Red Raw files, and to move through footage fast without standing at the DIT station. Since we have a specific shot we need to get at every location, we can load the previous day’s shot into Scratch Play and use it as a framing guide at the next location. This really helps ensure that we capture the perfect frame. All this power in a free application really boosts our productivity, while also significantly enhancing our creative process.”

“Our customers have told us they need a single product that can quickly and easily play any popular video and still format - from web content to cinematic cameras, to editorial and VFX media,” said Jeff Edson, CEO of Assimilate. “Scratch Play does that. You can double-click or drag and drop an R3D or Arri Raw file and it just plays. But we didn’t stop with just a single-shot player. We added the Construct, the industry’s most powerful timeline, to manage multiple shots and versions; and we added world-class grading and CDL tools that anyone can use to create, manage and export looks. Scratch Play is the ultimate companion for the media professional, from DSLR shooters up to A-list Hollywood features. And best of all, Scratch Play is free. Because it should be.”