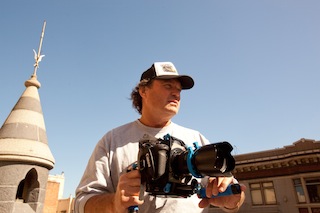 It was a challenging assignment even for a veteran shooter of car commercials. A major ad agency for a leading automaker asked cinematographer Dana Christiaansen if he could shoot three full commercials in 48 hours on the streets of Atlanta. The spots would include nighttime car-to-car photography of a moving vehicle, close-ups of a celebrity spokesman at the wheel and scripted vignettes. Christiaansen’s solution was to rely on the Canon EOS C300 digital cinema camera.

Working in a production style Christiaansen called “lean and mean,” he and his director averaged 50 to 60 set-ups per day (and night) shooting with Canon EOS C300 cinema cameras in both hand-held and Steadicam configurations.

“The EOS C300 camera is very light and its ergonomics are good,” he related. “We shot an entire green-screen sequence using the studio pre-visualization system, a fairly radical night scene in very low-light and then a day-exterior sequence. The camera’s latitude is excellent and our ability to pull keys on the green screen was fantastic at all the different ISOs. Every camera has its advantages in different areas; we found the EOS C300 camera is ahead of the curve in terms of low-light capability. We shot the entire night sequence in San Francisco at 3200, which allowed us to usually be around a 2.8 on the lens. The image quality of Canon lenses is crisp and the Canon 30-300mm high-speed zoom was incredible. The combination of Canon optics and the EOS C300 camera’s image quality, low-light sensitivity and lack of noise made the film look wonderful on a 42-foot movie theatre screen.” 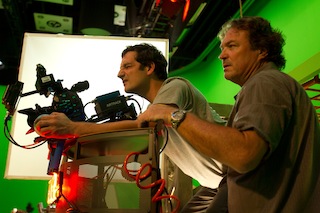 Confident of the capabilities of the Canon EOS C300 cinema camera, Christiaansen knew it would be the perfect solution for his next major assignment – a challenging trio of car commercials requiring cinematic image quality, extreme mobility, lots of night shots and a production schedule of just 48 hours.

Christiaansen tackled the job with three EOS C300 cinema cameras and a “run and gun” style of shooting consisting of him operating the “A” camera, another DP on the “B” camera for extra coverage of master shots and vignettes of a celebrity spokesman, and a third operator acting as a “hungry wolf with a great eye,” capturing inventive wide-angle atmosphere shots and other B-roll. The team used minimal lighting powered by batteries and a small “putt-putt” generator in the back of a pickup truck when additional lighting was needed.

“The EOS C300 camera has such incredible low-light sensitivity and such great image quality at 3200 ISO, we were able to shoot in almost any environment as long as there were street lights or something that gave us some ambient light,” Christiaansen explained. “The more lights there are – like storefronts and shops and interior lighting – the better it looked. We walked around using battery-operated LED lighting and two small 125-watt HMI par lights. We didn’t need a load of camera cars following us around with big generators, cabling and a bunch of gear to light up the streets. Additionally, battery power on the EOS C300 camera was never an issue. We were able to work fast and clean.”

In combination with its low-light capabilities, the Canon EOS C300 camera’s lightweight, highly mobile camera body (weighing less than four pounds), was also a major benefit to the production team’s ability to capture ample amounts of challenging coverage in a short space of time.

“The EOS C300 camera is so small we were able to be very flexible,” he noted. “It was easy to get handheld angles inside the car for interior-driving dialogue scenes of our spokesperson. We used Canon prime lenses in there. The lightweight design of the EOS C300 cameras made it easy to rig them to the outside of the cars as well. We hung an EOS C300 camera off a remote head on a spring-mount suspension arm bolted to our pickup truck for moving car-to-car shots, both leading and chasing the car we were photographing, as it drove through the streets. You can also ‘bungee-cam’ the EOS C300 camera very easily off of anything. The camera performed exactly as I expected it would and the spots came out great.” 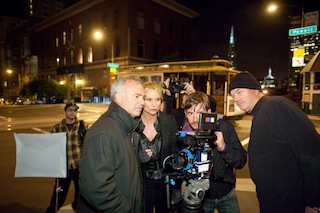 Conceived and designed by Canon based on extensive input from the motion-picture production community worldwide, and incorporating advanced technologies derived from the Company’s decades as a leader in digital imaging solutions, the EOS C300 digital cinema camera includes multiple innovations engineered for the capture of exceptional full 1920 x 1080 HD images. These innovations – including Canon’s Super 35mm CMOS sensor combined with Canon’s sophisticated DIGIC DV III image processor and a 50 Mbps 4:2:2 MPEG-2 codec – provide the remarkable low-light performance Christiaansen relied on for the Atlanta location shoot. He adds that this was just one of many features of the EOS C300 camera that made him a fan.

Other highly important EOS C300 camera features Christiaansen cites include: a sophisticated yet intuitive menu system, “very easy to navigate and change menus, whether you’re using Canon EF lenses or manual exposure and PL-mount lenses; the menu system is assignable to whatever you need to have happen”; a 0.52-inch, 1.55 megapixel color electronic viewfinder, “I come from a film background, so I used the viewfinder all the time and it’s very clear and detailed”; a built-in waveform monitor and vector scope display, “they enabled me to shoot like I was using film; I could assess the exposure and focus through the eyepiece and trust what I was looking at, which made the shoot go faster”; and a choice of three built-in neutral-density filters, “these are fantastic, they’re clean and there when you need them.”

Editing and color grading of Canon EOS C300 camera footage files are also greatly facilitated by the camera’s advanced capabilities. The EOS C300 camera records to two reusable, hot-swappable Compact Flash (CF) cards. Two 32GB CF cards provide approximately 160 minutes of 4:2:2 50 Mb/s (CBR) full HD 1920x1080 footage, which can be instantly ingested into most nonlinear HD edit systems. The EOS C300 camera also employs the industry-standard MXF (Material eXchange Format) for smooth workflow compatibility. The EOS C300 camera can be set to record in Canon Log, which is provided with the camera at no extra cost and helps to ensure capture of the full exposure latitude of which the camera is capable. This image-data capacity provides the film-style dynamic range between shadows and highlights that is essential for achieving cinematic subtleties in post-production color grading.

“I always shoot Canon Log,” Christiaansen informed. “Coming from a film background, I am used to shooting a well exposed negative and then finishing with a colorist. Canon Log is a great way to shoot for getting the best image quality out of the camera. On-board CF card recording adds so much to the usability of the camera. With Canon Log you can shoot, pull the CF card out of the EOS C300 camera and ingest it directly into whatever editing system you want to use. It opens up natively and you go to work on it right then and there. Editors and producers really like that. You can also record out of the SDI port in an even better format if you want to.”

With the three new car commercials finished and earning acclaim, Christiaansen sees the Canon EOS C300 as a camera of choice for future assignments.

“Producers increasingly need to get a lot done in a short time span,” he said. “The Canon EOS C300 is an excellent camera and it enables you to get great images at a reasonable rental price.  When producers and agencies see what the EOS Canon C300 camera costs, how we are using them and how well they make the job go, we think they’ll be impressed.”