We Kill Death An Immersive First 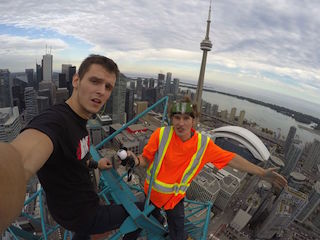 In what could be the most immersive movie experience ever, producers Alex A. Ginzburg and Tony Lee of Let It Play have announced a partnership with 4DX and ScreenX that will make their recently announced film We Kill Death the first feature film produced specifically for each of the two immersive cinema technology formats. We Kill Death focuses on YouTube stars Mustang Wanted, Oleg Cricket and the duo of Vitaliy Raskalov and Vadim Makhorov, who are familiar to millions of viewers around the world for their imaginative and death-defying stunts and adventures.

“4DX and ScreenX take the amazing and vast appeal these daredevils have achieved on social media and amplify its intensity, power and visual impact for the cinematic audience. The potential for 4DX and ScreenX in a film like We Kill Death is manifest,” Ginzburg says. “People report intense physical and emotional reactions just from watching these stunts on phones and computers. In 4DX and ScreenX theatres, audiences will be able to feel as if they are alongside the daredevils on screen. We believe that this film will deliver the single most visceral cinematic experience unlike any other.”

“This type of creative partnership is the direction ScreenX and 4DX is headed,” said Byung-hwan Choi, CEO of CJ 4DPlex. “The possibilities that film makers will have when making a film with 4DX and ScreenX in mind are only limited by imagination and I know that Alex and Tony have the perfect film with, We Kill Death to show the world what is possible in the future of cinema.”

The producers launched We Kill Death with “a live stunt unlike any other in the history of the Festival,” as three of the free climbing roof toppers – Mustang Wanted Vadim Makhorov and Vitaliy Raskalov – climbed a construction crane atop a 60-story building in downtown Toronto.

Producers Ginzburg and Lee, as well as invited guests and media marveled from the roof of Thompson Toronto a kilometer away as the three death-defying daredevils made their way onto the construction site and to the very top of the crane, at times dangling by their hands and feet several hundred meters from the ground.  The group sent a live feed of their aerial feat to the astonished throng assembled on the roof of the nearby hotel.  The group joined the party following their descent from the tower.