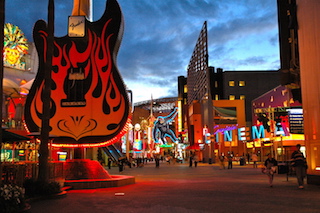 UniversalCityWalk, Los Angeles' landmark urban entertainment complex that ushered in a generation of similar open-air destinations, is undergoing an elaborate revitalization as the pop cultural mecca embraces change to remain contemporary and fresh. Christie RGB Laser projection, Dolby Atmos immersive surround sound and Christie Vive speakers will be the technology at the heart of the revamped complex.

For over 20 years, CityWalk has boosted the city's rhythm through a foundation built on providing memorable entertainment experiences.  With a series of dramatic enhancements currently underway that includes the introduction of new restaurants, shopping experiences, visually aesthetic design features and a state-of-the-art movie theatre renovation, the spotlight shines brightly on CityWalk as it continues to resonate as one of L.A.'s most influential lifestyle centers.

This significant undertaking coincides with Universal Studios Hollywood's recent epic transformation in which 75 percent of the world-class theme park was completely reimagined.

"This is an exciting time as Universal CityWalk undergoes a transformation of its own," said Larry Kurzweil, President of Universal Studios Hollywood. "For over two decades, CityWalk has been the go to place for locals and out-of-town visitors alike to enjoy a variety of entertainment, and we're excited to bring these significant enhancements to our guests as we continue to invest in our world-class destination."

Introduced in 1993, CityWalk was the prototypical one-stop leisure destination that redefined the mall of yesteryear as a vibrant multi-sensory outdoor complex. With grand neon signs and larger-than-life decorative sculptures complimenting the diverse offerings, this whimsical street was reflective of L.A.'s eclectic landscape and distinguishing characteristics. Hailed as a revolutionary achievement at its inception, CityWalk was constructed in collaboration with visionary architect Jon Jerde to mastermind the quintessential urban California street, set amid a theme park and a movie studio, and sandwiched between palm trees and asphalt. 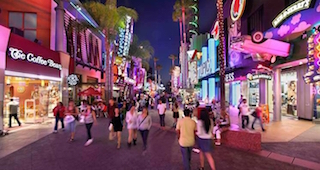 For film buffs, CityWalk has long been the epicenter for fans seeking an environment that matches the excitement of their favorite blockbusters. CityWalk's revitalization will elevate the Universal Cinemas to new heights as the 18 screen and Imax 3D theatre updates with the most technologically advanced sight and sound achievements.  A complete refurbishment of the split level structure will include the installation of deluxe recliner seats to all 18 theatres—the equivalent of those found in Hollywood screening rooms—making every seat, the best seat in the house.

An all-new dedicated and stylish second level bar-lounge, flanked by the upper level theatres, will add a new dimension to the space as it blends high-tech elegance with chic sophistication for casual pre- and post- movie-going fun.

The iconic, dancing water fountain situated at the heart of CityWalk recently got a splashing make-over from the designers behind the creation of the Las Vegas Bellagio hotel's spectacular water art. This new, modern and impressive display incorporates over 230 individual power jets projecting streams of water choreographed into the air, complimented by programmable colorful LED lights for round-the-clock entertainment. 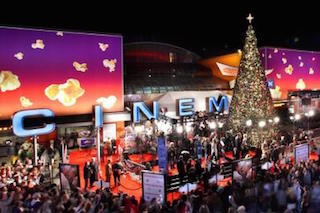 CityWalk shopping gets a running start with the grand opening of Shoe Palace, as the shop, renowned for selling top tier recreational shoes and apparel, joins a sampling of such retailers as Abercrombie & Fitch, Fossil, Skechers, Francesca's Collections, Guess Accessories, Hot Topic, Dodger's Clubhouse, The Raider Image, and Lush Cosmetics.

From A-list stars to A-list hopefuls, CityWalk has also been at the forefront of helping budding artists find their voice through its successful Street Performers program, a platform for emerging artists to showcase their talents to a wide range of visitors from across the globe.  In typical Southern California fashion, where aspiring artists migrate from all parts of the country to find fame and fortune, CityWalk's prolific Street Performers program has sustained since the beginning, evolving over time as a leading public stage for up-and-coming musicians to hone their craft before a live CityWalk audience, be it tourists, locals or talent agents.