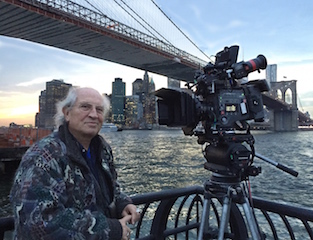 “When Woody Allen asked me to do Café Society, he had never done a digital capture before, but I knew that I had to jump completely into this new chance we had,” said Vittorio Storaro. “I wanted to see images on set that would be very close to the final result and afterwards on dailies even closer, almost 90 percent of that way to what we would see at the end.”

He said Anthony Raffaele with Baselight was able to offer that.

Storaro wanted to keep a 16-bit 4K workflow throughout. Due to his previous experience with Baselight – on Majid Majidi’s Muhammad: The Messenger of God – and its ability to work in multiple new formats, Storaro was also insistent that Baselight was the ideal system for both the dailies and DI. The project was shot on Sony F55 and F65 cameras and graded using the ACES standard, with Baselight converting to XYZ to retain quality and to allow high dynamic range output to all the deliverables.

Technicolor PostWorks New York completed the finishing on Café Society, Woody Allen’s first digital motion picture as a director, which was captured by legendary cinematographer Vittorio Storaro. The film opened the 2016 Cannes Film Festival and was released in the United States last month.

Set in the 1930s, the story charts the rise of the naïve young Bobby Dorfman (played by Jesse Eisenberg) from his humble origins in the Bronx before seeking fame in Hollywood and returning to New York in triumph. Storaro, working with senior colorist Anthony Raffaele, created looks that reflected the major locations, each in need of a distinctive visual style, and the development of the main character as he navigates a world of dreams and artifice.

“A real plus of ACES is that you can achieve every colour and density you could ever want,” said colorist Raffaele. “Vittorio always wants a crisp black level. But with digital projection you do not get the same quality black level as you do with print. The full support for ACES in Baselight enabled us to emulate film.”

Because Storaro insisted on the same colorist for dailies and finishing, Raffaele formed a close working relationship with on-set DIT Simone d’Archangelo, exchanging files and notes every day to ensure that what was seen on set was precisely what left the color suite.

Raffaele made extensive use of Baselight’s layer functionality, including emulating the original Technicolor three-strip process and colour intensity to create strong key looks, identifying each location.

“The Bronx was supposed to be a softer palette. It was poor, lower toned, with muted contrast,” Raffaele explained.  “Los Angeles was more vibrant, new, golden with luminous glow, reflecting the fact that our main character is in a more uplifted place. The New York look was a merging of the two, bringing something back from LA, with a fresher look. Bobby Dorfman has changed his life and so the image is a cleaner color palette, with more contrasts.”

He used a large part of the grading arsenal of Baselight, such as the DFuse tool to soften out skin, particularly to make the main female characters look more radiant and angelic. The Baselight layering tools helped him complete simple VFX jobs too, such as adding lights to a dawn scene and matting out unwanted objects.

Raffaele also pointed to Baselight’s ability to switch color spaces readily, allowing him to create the final grade in HDR on HD and immediately apply it to the 4K raw footage inside ACES, then roll out the deliverables to multiple color spaces.

“Anthony Raffaele is a wonderful colorist. He was with us from New York to Los Angeles, from the beginning to the end,” said Storaro. “That’s something I’m used to doing in Italy and I really love it, to have the same colorist doing dailies and doing the DI as well, following the movie through its entire journey.”

Storaro had a clear vision of the complete movie, including references to classical painters and photographers, and he also had a very strong understanding of the technologies involved to achieve what he wanted. He went through the exact same process as shooting in celluloid.

“Vittorio is an absolute perfectionist. He’s extremely technical and a great storyteller. He is also the most collaborative cinematographer I’ve ever worked with,” added Raffaele. “Plus he insisted on a Baselight grade – and that day the stars aligned for me.”