The eight-part PBS documentary finished at Technicolor PostWorks New York. Produced by Show of Force and directed by Maro Chermayeff and Jeff Dupre, the series reaches back to the 1920s, when music was first committed to vinyl, but focuses in particular on the period from the 1960s to the present and the revolution that was set in motion by the late Sir George Martin and the Beatles through their innovative use of multi-tracking.

For Technicolor PostWorks’ post-production team (who worked under the direction of series post producer Daniel Gilbert), finalizing sound and picture required considerable time and ingenuity. The series draws on incredibly rich and diverse source material, from newly-captured interviews with more than 150 luminaries of the music world to thousands of bits of archival media—behind-the-scenes clips; broadcast, documentary and concert footage; music videos, and much more—as well as hundreds of classic music recordings. All of that needed to be knitted into a story that looks and sounds seamless.

“It was a challenge, because we were working with elements from all over the world,” recalled colorist and online editor Mike Nuget. “We had video from Europe that had to be converted to an American standard, and film-original material from the 20s and 30s, through today, that needed clean-up. Formatting, frame sizes and overall quality were things we had to deal with daily.  It was like taking a visual journey through time, decade by decade, through the eyes of video and film equipment.” 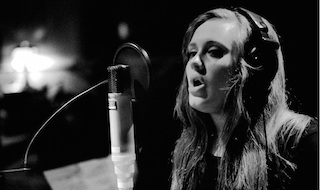 Achieving consistency was further complicated by the series’ unusual narrative structure. Rather than relate the history of recording chronologically, it breaks the story into themes, such as the advents of multi-tracking and electric instruments, and shows how those developments played out over time. The story moves backward and forward in time and between materials captured in diverse circumstances with very different recording gear.

“We might cut from an interview with a member of Radiohead from 2015 talking about something that happened in the 1970s to a clip from that era, and we wanted both parts to feel like they were in the same world, the Soundbreaking world,” Nuget explained.

Nuget helped bring cohesiveness to the material by developing generalized looks and applying them broadly. “There was a lot of black & white footage, and I purposely gave it all a certain edgy look, and we carried that throughout the whole series,” he said. “The interviews were shot over the course of several years by many different people. That was by far the most challenging thing thrown at me.”

Re-recording mixers Martin Czembor and Paul Furedi faced similar challenges in bringing consistency to the soundtrack. “We might have a Madonna track from the 80s,” said Czembor. “If you listened to it when it was originally recorded, you got a full experience, but, now, if we set it next to a Kanye West track, it can sound lacking because sonically so much has changed. Our role was to bring sounds from different eras together in a way that is smooth and coherent in order to show how they connect.”

Not surprisingly, sound plays an integral role in telling the story. In the soundtrack, elements are often woven together to illustrate the creative process. “There is a section where George Martin’s son is talking about how some of the Beatles’ songs were built, and he throws up a few faders so that you can hear how the parts come together,” Czembor said. “We go from the individual tracks and build into the whole song. It’s fascinating.

“We do a similar thing with Adele’s producer to show what she does with a song. We blend material from the recording studio, cinema verite scenes and the finished song. Those sequences are powerful because they get more across than you could possibly do with words and music alone.”

Even as the soundtrack was being finalized, new materials kept arriving. Czembor explained that the producers were determined to find the best recording for each music track featured in the series. That often involved searching the archives of record companies and producers, followed by sometimes protracted efforts to secure rights. If a new gem became available at the last minute, it was blended into the mix.

“The passion with which the Show of Force folks and Martin himself strove to procure the highest quality sources of this amazing material was impressive,” recalled Furedi.  “The quest for quality and the push for greatness were major themes that carried through all eight episodes of Soundbreaking and echoed throughout the audio post-production process.”

One of Czembor’s favorite sequences in the series involved Frank Sinatra and his groundbreaking microphone technique. “It weaves between interviews describing the uniqueness of his approach with Sinatra singing a love song,” Czembor recalled. “It was wonderful. It was challenging to mix but also fascinating and it was fun to try to get all that across.”