Is Remote Post-Production Here to Stay? 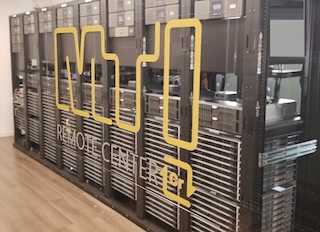 MTI Film in Hollywood is expanding its Remote Data Center, boosting capacity and adding new, cloud-based services, as editing teams increasingly embrace remote work, not merely as a stopgap measure during the pandemic, but as the new and more efficient paradigm for post-production. MTI Film CEO Larry Chernoff says that editors who began working remotely out of necessity are now doing so by choice. “Editors like the practical benefits of being able to work from home or other remote sites,” he said. “The pandemic was the catalyst, but remote work is quickly becoming the preferred choice for editing because it improves productivity and flexibility, and it enhances lifestyles.  Based on the experience thus far, we believe the future will be a hybrid of remote and on-premises operations supported by universal connectivity.”

MTI Film recently hired Jeff Kaye, a 30-year industry veteran, to lead the facility as production manager. He oversees operations, customer support, resource management and scheduling. Kaye previously served as general manager/finishing producer at The Foundation in Burbank. His background also includes tenures as an in-house producer at Arsenal FX Color and at MTI Film. Additionally, he served as director of operations at Level 3 Post and Encore Video.

Senior engineer Guthrie Demetrios, who joined MTI in 2018 and has played a key role in maintaining editorial, color grading and storage operations, has moved over from the company’s post-production facility to oversee the data center’s engineering team and its operation. All the facility’s engineers are Avid certified in Composer and NEXIS and have extensive backgrounds supporting editorial engineering.

Editors are flocking to the Remote Data Center because its remote workflow offers more than the convenience of being able to work from any location. Its infrastructure provides significant advantages over the traditional television model where editors work in a shared space over a local network. Users have immediate access to virtually unlimited storage as well as routine, secure, remote backup. Editing is worry-free as redundancies built into the infrastructure have enabled MTI Film to achieve a record of virtually no downtime. When problems do arise, the company provides live, 24-hour, 7-days-a-week engineering support, something few individual productions could afford.

Among series currently using the Remote Data Center is Swagger!, a new sports drama created by NBA superstar Kevin Durant for Apple TV+. Co-producer Michael Weiss says the production was seeking a solution that would allow editor David Blackburn and his crew to work from their homes efficiently and reliably. “What has most impressed me about MTI’s Remote Data Center is what it doesn’t do,” Weiss said. “It doesn’t crash, there is no latency in playback and there are no glitches. It functions just as it might if we were working in one office. We haven’t had a hiccup.”

Weiss adds that the resources provided by the facility make it a viable long-term solution. “Storing data offsite is very attractive,” he said. “Keeping your media at your workspace adds an extra layer of worry. Do we have enough power? Is there air conditioning in the room? Using MTI’s facility is like keeping your money in the bank rather than under a mattress.”

With MTI’s Cortex software integrated into the workflow, a host of new efficiencies have been introduced to the editorial process. The software significantly reduces the time assistants must spend preparing deliverables through its one-to-many rendering capability. Assistants can prepare data files formatted for various editorial and review purposes simultaneously rather than one-at-a-time, eliminating hours of tedious work.

Assistant editor Diana Cruz Hiatt performs her work for the FX series Pose from home, including the production and distribution of dailies. “I use Cortex to transcode files before sending them to the editors and producers,” she explained. “Formatting for each deliverable is preset, so all I have to do it bring in the files. Cortex creates all the renders simultaneously and automatically. It’s fast.”

Additionally, MTI Film developers are in regular, direct contact with users and draw on their input to create new features that improve efficiency and user-experience. A suggestion from Hiatt recently led to a new Cortex feature that automates the time-consuming process of producing visual effects pulls. The new tool allows assistant editors to automatically add FX names and comments as “burn ins” using Avid EDLs. The user can determine the size and placement of effects and generate reports with related information.

“It saves lots of time,” said Hiatt. “MTI’s development team is very enthusiastic about product improvements. They are anxious to learn about my experience and are always looking for ways to help me do my job better.”

Kaye predicts that many editors who connected to the Remote Data Center during the pandemic will continue to use it after the crisis is over. “Editors who try it, like it,” he said. “We have teams connecting to our infrastructure from across the state and as far away as New York and Idaho.”

MTI Film executive producer Barbara Marshall says the success of the Remote Data Center has exceeded the company’s best expectations. “Jeff and Guthrie have assembled an outstanding team,” she said. “They bring an ideal combination of knowledge, innovative thinking and experience. We also benefit from wonderful clients who’ve been incredibly supportive. We are grateful for the enthusiasm with which they’ve embraced this new approach to post-production.”