Producing with an Eye to the Future 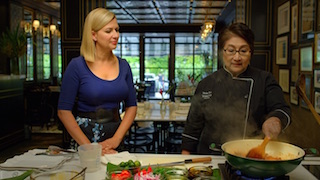 Created for Asian markets, where celebrity chef Anna Olson has a huge following, the show offers a lively mix of travel and cooking features with a Southeast Asian theme. Peace Point executive producer Les Tomlin says that his company decided to take the show to UHD in order to deliver the best quality product to Asia’s discriminating, tech-savvy viewers and ensure the show’s longevity. “We are future-proofing the show as television markets move to 4K,” he said.

The show is also the first to go through 4K editorial conforming, color grading and deliverable production at Pixel Underground. The facility recently completed a major upgrade that included the addition of new 4K gear to one of its DaVinci Resolve color grading theatres and one of its Avid Symphony finishing suites. It also made workflow enhancements that allow it to work with data-intensive 4K media in real-time.

“Both rooms were fully rewired. Our grading theatre now features 4K projection and monitoring systems,” said Pixel Underground founder and colorist Marc Bachli. “We also added the latest graphics cards so that we can handle 4K as easily as HD.” Pixel Underground works with original 4K camera media throughout the post-production process.

As Peace Point was preparing to go into production with the new show, Pixel Underground offered suggestions on 4K camera systems and how to set up off-line editing facilities for 4K in order to create a smooth workflow from the set through post. “We turn to them for advice on everything, not just post-production,” said Tomlin. “They understand the 4K universe and that made it simple for us to deliver a top-notch product.”

Pixel Underground’s Steve Jones served as conforming editor for the series; Bachli applied the final grade. Greg Luce was the workflow producer and Cailyn Webster was in-house post-production supervisor. The show has a poppy, colorful look, said Bachli, noting that the food, in particular, looks outstanding in high resolution. “Because of our longstanding experience in finishing television shows we were able to work in 4K with only a few modifications to our workflow,” he said. “It came off without a hitch.”

Having just recently premiered on the Asian Food Channel, Inspired with Anna Olson is fast on its way to becoming Peace Point’s latest hit food series. “The network is ecstatic,” said Tomlin. “It’s a very entertaining show and the picture quality—in terms of its richness and beauty—speaks for itself.”