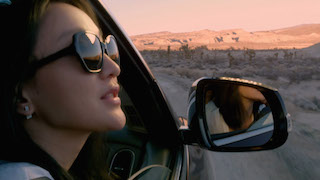 Phedon Papamichael, who is best known for big-screen cinematography on movies including The Descendants, The Ides Of March, The Monuments Men and Nebraska, which brought him an Oscar nomination in 2014, often shoots and directs commercials, where he can lavish attention on each moment and try out the vary latest gear. He recently shot and co-directed a branding film for the Infiniti QX50 with Codex Action Cams.

In the film, Chinese superstars, Archie Kao and Zhou Xun, portray a couple who decide to break the rules during a typical car shoot, and get a taste of freedom in the new SUV. Chased by paparazzi on motorcycles, they abscond to the Griffith Observatory, where they evade the pursuit by going off-road in Griffith Park. Other scenes were shot in the high desert near Mojave, and at Zuma Beach north of Malibu, where they frolic on the sand, shooting movies on their cellphones.

They eventually return the car to the soundstage, where the frustrated director looks at the cellphone footage of their escapades.

The film was directed by Jaume Collet-Sera, through production company Bullitt. Papamichael took over directing duties on a final day of the five-day shoot, which involved beauty stage-work of the vehicle. The toolkit, mainly provided by CamTec in Burbank, included two Red Dragon cameras, a drone mounted with a Panasonic Lumix GH4, an Edge vehicle and crane, three Canon 6Ds shooting time-lapse footage, plus two Codex Action Cams.

“We initially added the Codex Action Cams to our camera package for travelling car logo/badge shots and other moving details,” said first AC Jeff Porter. “But when Phedon and Jaume saw that you can literally hold the Action Cam head in the palm of your hand, they wanted to play. They saw an opportunity to shoot unscripted, spontaneous moments with the actors driving in the Infiniti SUV.”

However, limited space inside the car meant there was no room for camera operators or focus pullers.

Consequently, Papamichael and Collet-Sera were given small, handheld monitors, and quickly instructed in how operate the Codex Camera Control Recorder. 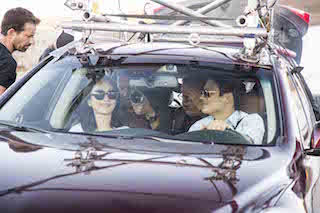 “We literally held the cameras with one hand and went free-driving with the actors,” said Papamichael. “Because we used these small cameras, we were able to get probably 100 set-ups on a 30-minute drive. It was great. From the back seat, I could hold Action Cam out the window and point it through the side window of the front seat, getting a hostess-tray-type shot. I could rake the car and get the actress’ reflection in the rear-view mirror. We were working quickly and winging it. There’s a lot of shaking and bumps in there, but it definitely made for some usable shots that we could never have gotten otherwise.”

Codex Action Cam is a tiny remote camera head that shoots up to 60fps. With a single co-ax cable to the Codex Camera Control Recorder, it delivers a proven workflow. It uses a 2/3-inch single-chip sensor with a global shutter to capture 1920 x 1080 HD images with wide dynamic range. Papamichael appreciated the Action Cam’s compatibility with professional grade cine lenses – in this case he opted for Super 16-format Zeiss Superspeeds, with a C-mount-to-PL-mount adaptor.

“I could roll the iris with one finger,” added Papamichael. “The little monitor was lying on my lap and I could pull my own focus to a degree. I would open it up and get the image flared out, or we’d come out of a tunnel and I’d roll the iris closed. People are excited about the footage we got. I’m thinking that with short edits, it will integrate pretty well with the Red footage we shot. Action Cam gives you a lot of possibilities – and it’s certainly a fun option to play with.”

The Action Cams recorded 1920 x 1080 imagery that Codex Tech Nick Lantz converted to 10-bit DPX files. For the most part, a rate of 25fps was called for, as the commercial is meant for broadcast in China, although Papamichael sometimes shot up to 50fps. The Red cameras were set up to capture images at 4K resolution with 5:1 compression. Papamichael used Optimo zooms on these cameras in part because he likes the way they flare.

“The beautiful moments that Phedon and Jaume captured of Archie and Xun with the Codex Action Cams could not have been achieved with a process trailer, or with a camera operator and focus puller jammed into the front seat,” said Porter.

“The images are simply amazing. For previous car and motorcycle commercials, Phedon and I have used a variety of other small cameras, such as the Novo 2K, BlackMagic Pocket Camera and GoPros. But the Codex Action Cam is by far the best. Besides its amazing image quality and low light capability, it is the only one of these cameras that has a global shutter, which virtually eliminates the wobble- or Jello-effect we’ve experienced when we have mounted cameras with rolling shutters onto vibrating cars or motorcycles.”