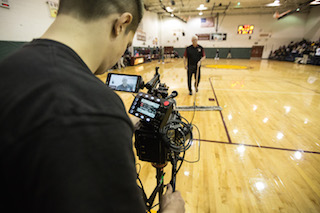 Content studio Malka Media of Hoboken, New Jersey is currently shooting a documentary series for release online about Jersey City, New Jersey’s St. Anthony High School and its legendary basketball coach, Bob Hurley with VariCam LT 4K cinema camcorders. Louis Krubich, Malka Media CEO and series director said that when longtime client Showtime approached him about the St. Anthony story, he and his staff directors of photography agreed that the VariCam LT would be a great choice for this sports documentary, largely because of its 4K acquisition and dual-native 800/5000s.

“We’re shooting in 4K even though the series will initially air in HD,” Krubich said, “not only for the incredible image quality, but also because we envision putting together a subsequent documentary that we’d be in a position to merchandise to a network that would stipulate 4K.”

Krubich said that the series, which comprises six episodes of only 10-12 minutes each, tells many narratives, following Coach Hurley off the court at home with his wife, documenting the complicated life situations of several of the players, capturing practices and home games, all under the shadow of St. Anthony’s possible closure. 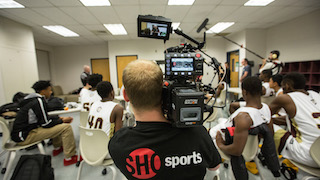 “This is the most versatile camera for documentary shooting on the market,” said Mark Cambria, one of two series’ DPs. “It’s 4K, and produces a beautiful, near RAW image. I am mostly run and gun, so my subjects move in and out of dark places often. Because there are two native sensors, I never have to worry if my image will lose quality when bumping up ISO. I just switch to the 5000 native and that covers me in low light.”

“I can plug my mics and reference audio receivers directly into the XLR ports, and the sound is great. Switching back and forth from slow to fast motion requires me to change codecs, so to cut down that switch time I was able to set up Scene Files that let me to move back and forth with ease,” Cambria continued. “I am also editing this project (in Premiere Pro), so my favorite feature has got be the dual recording. I am able to record my full-res footage on the Panasonic P2 card, while simultaneously recording low-res proxies on the SD card in the second slot.”

“The LT is a camera that can adapt,” added Derek Brown, second series’ DP. “Whether you’re following a documentary subject outside at night or on set shooting a commercial, you can capture great images with it.”

The 2016-17 season marks Bob Hurley’s 45th year of coaching at the school, and potentially the final season of St. Anthony basketball, which has won 28 state championships (nine consecutively), more than any other high school team. If ambitious fundraising efforts fall short, the school will shut its doors and retire the most successful high school basketball program in history.

With more than 1000 wins and as one of only a handful of high school coaches in the Basketball Hall of Fame, Hurley is considered by many to be the greatest coach ever on the secondary school level. The inherent drama of a flailing school with an talented inner-city squadron is compounded by the fact that Coach Hurley is also the president of St. Anthony’s, whose deteriorating school building doesn’t even have a gym; the team practices and plays off-site.