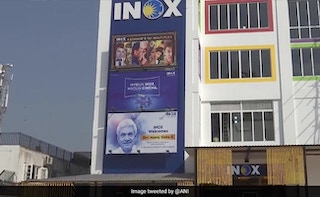 For the first time in more than thirty years, cinema lovers in Kashmir, the northernmost geographical region of the Indian subcontinent, will be able to see films on the big screen. Jammu and Kashmir Lieutenant Governor Manoj Sinha this week inaugurated the valley’s first multiplex in the Sonawar area of the city.

The opening of the multiplex, which will be operated by Inox, comes close on the heels of the lieutenant governor inaugurating multipurpose cinema halls – one each in the twin Pulwama and Shopian districts.

"Congratulations to the Inox Group, Sinha said. “A major socio-economic revolution is sweeping through Jammu and Kashmir in the last three years. It is a reflection of a new dawn of hope, dreams, confidence and aspirations of people."

The first multiplex in Kashmir has three movie theatres with a total capacity of 520 seats. The premises will also have a food court aimed at promoting the local cuisine.

The decision to reopen movie theatres and other businesses could not have been an easy one. The cinema halls have reopened in the valley after three decades as theatre owners downed their shutters in the Valley due to threats and attacks by militants in the late 1980s and early 1990s.

The Valley had seen nearly a dozen stand-alone cinema halls functioning till the late 1980s, but they had to close after two terrorist groups threatened the owners.

Though authorities made attempts to reopen some of the theatres in the late 1990s, terrorists thwarted such efforts by carrying out a deadly grenade attack on Regal Cinema in the heart of Lal Chowk in September 1999.

Two other theatres – Neelam and Broadway – and opened their doors but had to shut business due to poor response.