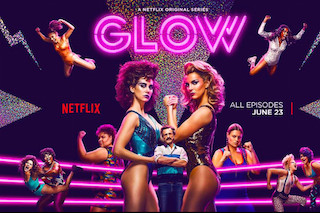 The Netflix series GLOW, which launched its 10-episode third season in August 2019, brings the Gorgeous Ladies of Wrestling to Las Vegas and the fictitious Fan-Tan Hotel and Casino. The production captures the personal and professional lives of a group of women who perform for a wrestling organization that started in Los Angeles but now find themselves in glitzy Las Vegas during the 1980s. Cinematographer Chris Teague met with show creators, executive producers and episode writers Liz Flahive and Carly Mensch to pitch his ideas for the new look of GLOW for its new Las Vegas setting, which is where they realized that everyone was on the same page.

“There’s definitely a different look for season three in Las Vegas,” said Teague. “While the previous two seasons were also shot on Cooke Anamorphic/i lenses, Las Vegas is a different world. I tested a bunch of different anamorphic lenses, and decided to stick with Cooke.”

With the Netflix requirement to shoot in 4K, Teague selected the Red Helium 8K sensor, which he had previously used on the TV series Russian Doll, after also testing the Red Gemini 5K sensor. “Both sensors looked great, but I had a great experience with the Helium on Russian Doll so I decided to stick with it,” he said. 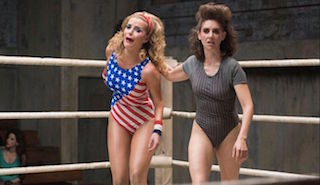 “The big difference for season three was to make sure we brought Las Vegas into the show in a way that it felt like in the 1980s,” Teague said. “We also had to have a homogeneous look from previous seasons, while not reinventing the wheel. We introduced a lot more color into the lighting. But while Las Vegas is not synonymous with the word subtle, it doesn’t look like Showgirls either. We chose not to use multiple saturated colors in every frame, but selected a handful of richer tones, like emeralds and pinks, to evoke an older, more refined Las Vegas era. While the Fan-Tan would have been at its best during the Rat Pack era, it’s a bit run-down, but trying to maintain that luxury and glamour.”

Teague had not worked with anamorphic lenses before, but he was no stranger to Cooke lenses.  While he had to learn the different characteristics of the lenses, the Cooke Anamorphic/i and zooms gave him the look he was aiming for.

“I’m very familiar with Cooke lenses,” said Teague. “I’ve owned two different sets of Speed Panchros that I’ve worked with on a lot of features, so I’m super familiar with The Cooke Look and got to know what subject areas they work with. For Obvious Child in 2014, they were great for shooting something organic, warm, and earthy.

“What I learned to love about these newer Cooke Anamorphic/i prime and zoom lenses is the great anamorphic fall-off on the edges, but fall-off that would not get me into trouble as I would be with other anamorphic lenses I tested,” he continued. “The Cookes have great anamorphic quality…a gentleness and consistent reliability which is paramount on a TV schedule, not having to deal with sharpness issues and not having to relight a scene. That’s also where the zooms came in. We didn’t use them as traditional zoom lenses, but either for the third camera body as a stand-in for a prime lens or on a telescoping crane.”

In addition to repurposing the zoom lenses to suit his needs, Teague also used the 65mm macro primarily as a straight 65mm prime, with very little macro work. But his three most used lenses for GLOW: “Without question, and in order, they were the 75mm, 100mm, then the 40mm. They’re just great lenses.”