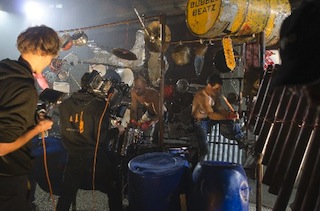 Kamerawerk is producing Bubble Beatz's No Sleep, a story-driven music video using not only 4K acquisition but a complete 4K 60 frame per second production pipeline including cameras, editing, color grading and finishing.

Kamerawerk worked with Bubble Beatz, an innovative percussion act with a large following in Germany and Switzerland, who performed No Sleep for the music clip which will be available free for download and viewing on UHDTVs and Retina Displays in late 2013.

Kamerawerk called on technology partners to find accessible workflows to handle high spatial and high temporal resolution video data for not only the image acquisition but for the whole video production and post-production pipeline. Adobe’s video tools seemed to be the most flexible to the heavy demands brought on by this project; additionally Sony had just finalized the F65 RAW plug-in for Adobe Premiere Pro. An HP Z820 was required to handle the huge demands on processing and the requirements for expandability, allowing for high bandwidth RAID storage and video cards to be installed with enough PCIe bandwidth to be shared between devices.

Bluefish444 was contacted by Nicolas Henri Sieber, producer at Kamerawerk to see if it could provide a video output solution capable of 4096 x 2160 video frames at a rate of 60 frames per second. Some customization of the official Bluefish444 Adobe Mercury Transmit plug-in for Adobe Premiere Pro was required in order to allow Kamerawerk to edit, color grade and finish the project with full resolution 4K 60fps HD-SDI video preview. The Sony PVM X300 display had just been certified by Bluefish444 as a compatible display, and was the only native 4096 x 2160 HD-SDI display capable of 60fps.

“We had already been granted project support from the European Broadcasting Union for whom we've shot stereoscopic 2Kp50 and HDp120 HFR reference material last summer,” said Nicolas Henri Sieber, producer, Kamerawerk GmbH Switzerland. “This project was really pushing technology to its limit. Having Bluefish444 provide an HDSDI output solution for Adobe’s video tools helped us work in a familiar environment with a desktop editor and HDSDI client monitor.”

“Sony Australia has been fundamental in assisting Bluefish444 certify our 4K video outputs, including making sure our Adobe Mercury Transmit Plug-in was working at 60fps before Kamerawerk completed post production,” said Tom Lithgow, production specialist at Bluefish444. “At Bluefish444 we have strong relationships with partners like Sony, Adobe, HP and NVIDIA, so the Kamerawerk proposal to achieve 4K 60P video output seemed far reaching but achievable.”