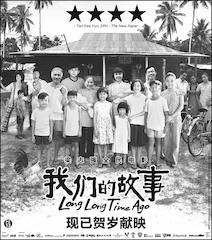 Among the Auro-converts is Neo, who mixed his latest effort. The movie, which features an ensemble of local veteran artists including Aileen Tan, Mark Lee, Wang Lei and Suhaimi Yusof, takes place somewhere between 1965 and the early 1970s. It tells the history of Singapore’s growth as a nation through the story of protagonist Zhao Di (played by Aileen Tan), as her family journeys through the years from their humble Kampong (village) to a modern HDB flat. The moody cinematography, combined with the unique features of Auro 11.1, evoke a historic setting that truly envelops the audience.

“I have always wanted my audiences to fully experience the various sounds in my films as audio is an important part of any film, just like the images. With the collaboration with Barco  and Auro Technologies, my audiences can truly experience the audio landscape in my movies as immersive as I have intended,” says Neo.

“It’s great to get the opportunity to support this unique cinematic experience with Auro 11.1 in Singapore,” says Wilfred Van Baelen, CEO and founder of Auro Technolgies. “I’m convinced that moviegoers will be thrilled by the experience, and feel part of the history of Singapore.”

“Visualization has grown tremendously in recent years, while the evolution of audio technology has been much more gradual,” explains Sebastian Fong, project manager at Golden Village. “That’s why Auro 11.1 by Barco is such a monumental revolution in the history of cinema. When it is known that 50 percent of the movie going experience relies on pitch-perfect audio, you understand why we’re so proud to be the first cinema operator to launch Auro 11.1 in Singapore.”

Eddie Tan, Barco’s general manager entertainment Southeast Asia says,“By turning every boom, swoop and whisper on screen into a compelling experience, Auro 11.1 by Barco turns a night at the movies into the ultimate adventure. In this way, it gives film fans another compelling reason to go to the theatre, instead of watching movies in the confines of their homes.”