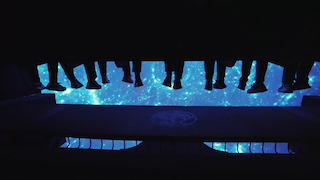 In the early 1990s, a vast expanse of farmland in central Zhejiang, China, was procured by the Hengdian Group. The goal was to build an expansive film studio and later adding attractions to turn it in a theme park that recreated thousands of years of Chinese history and culture. Today, Hengdian World Studios is known as the largest film studio in the world, spanning over 370 hectares. Hengdian World Studios is always looking to continue to innovate and expand for the 20 million tourists which visit each year. In its latest venture, visitors are plunged into a so-called Flying Theatre, installed inside the Qin Palace set.

With more than 1,200 movies and TV shows filmed on the grounds, including the recent 2020 live action remake of Mulan, the studio has continued share China’s culture with the world. Film crews are welcome to rent the scenes available free of charge, thanks to the theme park attractions that bring the steady stream of tourism that floods the grounds every year.

German integrator project: syntropy worked on the concept and system design for the theatre, including delivery, installation, and locally sourced maintenance. Making use of more than a decade of experience in serious flight training and simulation, they developed an entirely new generation of flying theatre experiences. “The theatre is a mix between a theme park ride and a cinema,” Christoph Bode, CTO of project: syntropy, explained. “Users are suspended in ride seats in front of a 25 meter domed screen. The seats then lurch and move as though the users are in the film, creating a fully immersive experience for the user.” 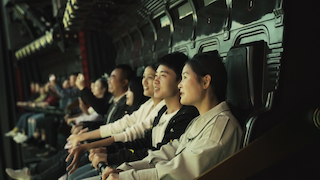 The projection equipment for this venue was a vital component for the theatre. The projection needed to be flawless, with visitors directly facing it at all times. Project: syntropy chose 16 of Digital Projection’s HIGHlite Laser II for the projection.

“We needed a projector that could provide a state-of-the-art visual result without needing maintenance frequently, which seemed an impossible feat,” said Bode. “The HIGHlite Laser ticked all our requirements. The visual result is magnificent, with an impressive uniformity for the full 4K dome screen master play back. Brightness values were vital to the size of the dome screen, and the HIGHlite met them with ease. We also needed a company that was in close proximity, allowing for capable technicians at the site within a day’s notice – something Digital Projection China could provide.” 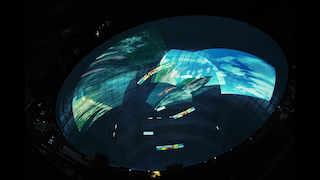 Lars Steffens, projection expert at project: syntropy, explained that the projectors and calibration cameras were installed around the opening of the dome screen, ensuring full coverage for the visuals. The dome’s visuals are supported by a sophisticated 20-plus multi-channel surround sound system located behind the screen, ensuring users are completely immersed into an environment that literally plunges them into a totally different world.

“We calibrated the projectors using the well renowned camera-based auto-calibration system by domeprojection.com – it calibrates in less than 20 minutes for all 16 projectors, which is important for the nature of the ride,” said engineer Juliane Neumann, who did the initial calibration of the system and set up the automated procedures.

The projectors are controlled and calibrated via AV Stumpfl’s Pixera 64-bit media control interface software. With its user-friendly interface, the software allows for any of the park’s employees to manage the system without a wealth of projection or calibration experience.

“The end result matched what Hengdian Studios asked for perfectly, and we were really pleased with the result. One of my colleagues went on the ride and said it was an incredible experience,” saidTobias Kubacki, site manager at project: syntropy.