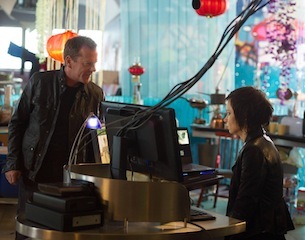 Encore uses a global post workflow for the on-site dailies and post-production services for all 12 episodes of the Fox series 24: Live Another Day. Shot in London, Encore's local office manages the dailies workflow and then pipes footage back to Encore Hollywood for online editing, coloring and finishing.

“Encore’s powerful technical infrastructure provides our talented creatives with the connectivity to deliver soup to nuts services to clients, wherever production may be located and at the elevated standard for which Encore is known. 24 is an iconic show with a worldwide following, so it’s fitting that post-production for the new series event spans the globe. We’re thrilled to be working on a show with such a storied legacy,” said Encore executive vice president Bill Romeo.

After, footage is synched, metadata is entered and four deliverable formats are rendered: Avid DNX36 Avid for editorial, ISO DVD for production, QuickTime for DP Jeffrey Mygatt’s iPad reviews and MP4 files, which are uploaded to the DAX Platform for collaborative review. At the start of each day, DNX36 material is copied to shuttle drives and delivered to editorial, then pushed to Encore Hollywood via Aspera P2P. Original source material is archived to LTO-5 tapes and shipped to Encore Hollywood at regular intervals.

Given a compressed post-production schedule, the direct line between Encore Hollywood and Encore London has proven crucial to keeping the project on track, with 24’s post-production supervisor Janelle Lopez and associate producer Ashley Contino overseeing work in Los Angeles.

Upon receiving the offline edit from production, Encore senior editor Heydar Adel, who worked on all eight previous seasons of 24, conforms episodes using an Avid Symphony to create a cut with high-resolution source footage. He then adds secondary fixes and effects like gun muzzle flashes using Adobe After Effects and integrates shots from the VFX department. The show’s trademark split screen adds a layer of complexity to each edit, but Adel is still able to complete the first pass in about five hours with an additional three to four hours for VFX.

Content is then routed to Encore senior colorist Kevin Kirwan for grading on a Linux-based Blackmagic DaVinci Resolve system. Having viewed a selection of previous episodes at the outset of the project, Kirwan, with additional guidance from Mygatt, maintains the show’s well-established and stylized look.

Unlike more traditional programs where a colorist can ripple a change through a scene, split screen scenes require Kirwan to color the paneled shots cut by cut – a complex feat that produces visually striking results. At the end of each session, files are sent to London for notes from Mygatt and the producers, with Lopez providing feedback in the bay. Both Kirwan and Mygatt use professionally calibrated, consumer grade Panasonic plasma televisions for monitoring at 1080p. Once color correction is complete, a process that takes Kirwan on average 12 to 13 hours, the episode is sent back to Adel to add final titling and graphics, including the show’s clock counting down real-time.

24: Live Another Day is a production of Teakwood Lane Productions in association with 20th Century Fox Television and Imagine Television. Howard Gordon, Evan Katz, Manny Coto, David Fury, Robert Cochran, Brian Grazer, Jon Cassar and Kiefer Sutherland are executive producers. The original series, which had its last American broadcast on May 24, 2010, was created by Joel Surnow and Cochran.

For more information on the series, visit: http://www.fox.com/24-live-another-day/