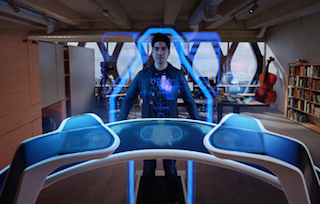 “For 100 years, Deluxe has been at the forefront of entertainment innovation. Adding a suite of virtual reality services is a natural extension of the company’s industry leading digital post-production capabilities into this new high-growth content arena,” said Stefan Sonnefeld, CEO, Deluxe Creative Services. “Deluxe has established a workflow precedent that gives our clients better ways to build high-res 360 content faster and more efficiently.”

"Building on our tradition of leading innovation, Deluxe will provide its virtual reality customers a premier pipeline for the processing and development of content in the virtual reality world, automating a process that can otherwise be very time and labor intensive," said David Kassler, CEO, Deluxe Entertainment Services.

To ensure an accurate likeness, special attention was paid to all aspects of his virtual alter ego. In addition to creating a photo-real digital model, his facial performance was captured and animated to match the narrated voiceover. Deluxe also provided automated dialogue replacement for the project.

Deluxe and Kite & Lightning will be demonstrating the Neuro VR experience during the Cannes Lions International Festival of Creativity being held June 21-27, 2015 in Cannes, France.