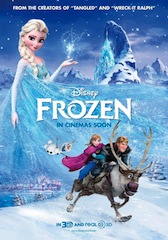 CJ 4DPlex, which calls itself the world’s first 4D cinema company for feature films, will demonstrate the next generation of its 4DX technology at CinemaCon 2014 March 24-27 at Caesar’s Palace in Las Vegas. The company will also announce new deals that it says will bring its global expansion to its 100th theatre.

The most successful 4DX-enabled film in 2013 was Frozen, which saw an occupancy rate 15 to 30 percent higher than 2D and 3D showings in the countries in which 4DX was available (Brazil, Columbia, Guatemala, Korea, Peru and Russia).  In fact, 4DX showings of Frozen in Korea had a 61 percent occupancy rate, compared with 44 percent for 2D and 41 percent for 3D.

Also noteworthy were several events that leveraged the 4DX immersive experience, including a Mayday Live Concert in China and Taiwan (over 90 percent occupancy) and K-pop star G-Dragon’s concert shown in Indonesia (80 percent occupancy in opening weekend).

Since debuting with a 4D screening of Avatar in 2010, more than 14,000 4DX seats are now operating in 91 theatres in 23 countries. In 2013 alone, 4DX was installed for the first time in 14 countries – Bulgaria, Chile, Colombia, Croatia, Czech Republic, Guatemala, Hungary, Indonesia, Japan, Poland, Taiwan, Ukraine, the United Arab Emirates and Venezuela. Those 47 new screens compares with 13 openings in 2012.

The next generation 4DX motion chair includes the following features:

An upgraded water effect system that simulates rain from above

The ability to switch the water on or off

LED lights on the footrest for increased safety

“We are incredibly proud of how quickly 4DX has been adopted, particularly over the past 12-18 months, and are looking forward to showcasing this state of the art technology to additional exhibitors looking to build premium cinema experiences in the United States, as we look to aggressively expand in 2014,” said Byung Hwan Choi, CEO of CJ 4DPlex. “Not only are we committed to improving the experience and 4D effects featured in theatres, but also to working with the studios to bring the world’s best films to theatres equipped with 4DX.  This has proven to be valuable to theatres and fans alike – with fandom being developed in different markets, leading to unique events that generated incredible social media attention and word of mouth buzz for the theatres.  These included costume parties held in Europe and Asia for Pacific Rim and The Hobbit: Desolation of Smaug.”