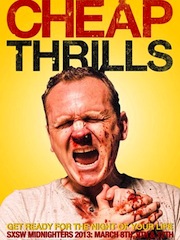 Cinedigm announced today that it has partnered with Drafthouse Films, the distribution arm of Alamo Drafthouse Cinemas, to release a slate of critically acclaimed films across all home entertainment channels.  Platforms will include DVD/Blu-ray, broadcast television, subscription VOD, cable VOD, and digital platforms. The partnership between Cinedigm and Drafthouse will begin in January 2014 with the pre-theatrical VOD release of SXSW award-winner Cheap Thrills, starring Ethan Embry, Pat Healy, and Sara Paxton, followed by a theatrical release in February.

Other upcoming films include Ari Folman's The Congress, which premiered at Cannes and stars Robin Wright; acclaimed Cannes premiere Borgman, and Ben Wheatley's latest film, A Field in England.

Drafthouse Films is a curated brand of provocative, visionary and artfully unusual films new and old from around the world. Following the earnestly simple motto of “sharing the films we love with widest audience possible,” Drafthouse Films debuted in 2010 with the theatrical release of the controversial black comedy Four Lions, which was named one of Time Magazine’s Top 10 Films of the Year. The following year, Drafthouse title Bullhead, the widely praised Belgian drama, received an Academy Award nomination for Outstanding Foreign Film. Recently, Drafthouse released The Act of Killing, a chilling documentary, which led acclaimed filmmaker Werner Herzog to proclaim, “I have not seen a film as powerful … surreal, and frightening in at least a decade… unprecedented in the history of cinema.” The film continues to shine in theaters across the US, and Drafthouse has recently announced a unique partnership with Vice and VHX to offer free downloads of The Act of Killing to audiences across Indonesia, where the events in the film take place.  Going forward, Drafthouse plans to release 10-12 films in theaters in 2014.

“We have long been huge fans of the Alamo Drafthouse brand, and since its inception a few years ago, have been continually impressed by the taste and vision of Drafthouse Films,” said Cinedigm Entertainment Group co-president Susan Margolin.  "We are thrilled to partner with Tim League, James Shapiro and the talented Drafthouse team to bring the highly distinctive voice of the Drafthouse Films brand to home audiences beginning this January.  It's a great fit."

"It's exciting to be in partnership with Cinedigm,” said James Emanuel Shapiro, chief operating officer of Alamo Drafthouse.  “Its commitment to building the brand through innovation is impressive. The Drafthouse Films team is honored to work with them and we really feel like the sky is the limit!"