The Challenge of Filming a Moving Car 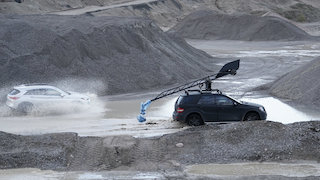 Capturing and producing high-quality dynamic and fast-paced vehicle footage creates some of the most testing logistical challenges that film, television, and commercial production teams contend with. Kala, a production, and dynamic camera movement company based in Canada, is all too aware of the challenges of shooting moving vehicles.

“For any of these types of shoots, whether a vehicle commercial or stunt scene, the camera vehicle is packed,” says Kala co-founder and cinematographer Vinit Borrison. “It has a remote-control crane arm that one person is assigned to, a camera operator assigned to move the camera on that arm, a focus puller in the rear of the vehicle to ensure the pictures are sharp and a driver who responds to direction as to how and where to drive the vehicle.”

Vehicle-to-vehicle shoots are highly specialized and have traditionally involved at least three vehicles; one as the subject for the content, another to capture the content, and the last one acts as a chase vehicle to ensure a line-of-sight video signal for the creatives to direct the action.

Factor in working in remote locations or challenging terrain, keeping multiple stakeholders informed, transporting production personnel – not to mention hiring some of the best drivers in the business to keep all the support vehicles out of shot – and the logistical headaches and costs can quickly start to spiral. 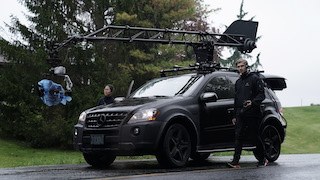 Production efficiencies are key to managing costs and logistics in these fast-paced environments. At the same time, reliable and easy connectivity is vital to keeping everybody in the loop, whether on set or working remotely. New streamlined communication workflows, using unmatched connectivity solutions that enable real-time remote collaboration, significantly save the time and cost a production would typically require to coordinate multiple moving vehicles on set. They can entirely remove the requirement for a temporary local base camp or video village that would usually host directors, producers, and commercial teams.

Capturing these high-speed scenes requires a chase vehicle to carry the creative team to ensure they generate the right shots. That vehicle must be close enough to receive line-of-sight video transmission and coordinated enough to stay out of sight. “Maintaining formation and avoiding being in the shot takes a lot of skill,” explains Brandon Cooper, president, film, and new media at First Mile Technologies. “A key issue is that live video transmission has traditionally been short range, which is why multiple vehicles have been required to shoot motion picture projects.”

In addition, outdoor location work has typically required other stakeholders to be on site to assess shots for creative input. For commercial work, collaboration is key, with stakeholders from the agency and the client needing editorial input as well as the production crew. If a shoot takes place on a mountainside, for example – or another location where connectivity is limited – there is every possibility that the crew may return to a base camp with only a few clips for review, which hinders off-set creatives and slows the collaboration process. 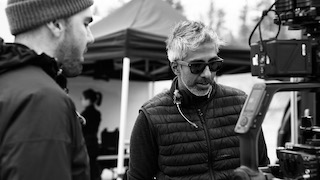 “That’s a big deal because we’re usually having to drive some distance from base camps to be able to shoot remote scenery, and often adding environmental effects like rain,” says Borrison. “Those things aren’t easy to reset for another shot quickly, so if the creatives only see footage after returning to base camp, we have to reset a lot of elements to capture another take.”

Borrison adds, “Most productions require a video village and a data dumping station, which presents additional challenges in reviewing footage to the wider creative team. Besides just reviewing footage on set, often we are copying and backing up large amounts of raw data from the camera. Backups are generally done on site, however with the resilient connectivity provided by Dejero, Kala can transfer proxy-based files, as they shoot, to the cloud. Raw content is still delivered on physical hard drives but being able to send proxies over the air eliminates significant delays whenever distance from the city is a factor.”

To streamline these processes, Kala worked with First Mile Technologies to integrate Dejero technology directly into its ground-breaking cinematic production vehicle. It ultimately combines camera systems, connectivity, and creative decision-making functionalities into one. KALA’s vision was to streamline the entire production and post-production processes and facilitate remote collaboration in real-time. “For Kala, we installed an antenna on the roof of the vehicle to further increase network diversity for the EnGo, and because the EnGo can be removed from the truck it can be used in other locations should the production call for it,” says Cooper. “We have worked in many connectivity dead zones, but we’ve always had success with the Dejero configuration.”

Adhering to H.264 AVC and H.265 HEVC further expands bandwidth and helps achieve a glass-to-glass sub second latency over a bonded cellular connection. From wireless remote-controlled cameras positioned on cranes and arms in moving vehicles and other set locations, the live camera feeds are transported in real-time to a Dejero WayPoint receiver, a cloud server or via the First Mile Web RTC platform, and then on to geographically distributed creative teams.

This technology creates a single virtual ‘network of networks’ to provide access to a far greater coverage area than any single provider can deliver. What’s more, if any single connection becomes congested, the system can automatically reroute packets in real-time across other connection paths.

“Having something which can expand signal coverage using multiple carriers across multiple cell towers helps us enormously,” says Borrison. “Sometimes we just don’t know where we’re going to end up or what conditions we’re going to face, and having another set of eyes on the set, in real time – whether that’s an editor or the client tuning in remotely – helps us to fix any mistakes on the fly as opposed to after the fact where we would have to schedule a reshoot. It allows us to be smarter and more efficient when we service a job.”

Dejero has enabled Kala to maximize the cost efficiency of every single shoot by making the most of their time on set.

“People having to crowd around a few monitors on set has been superseded by a virtual video village because we can now connect our client’s creatives and stakeholders from the comfort of their homes or studios,” continues Borrison. “It means that everyone has an optimal view of what is being filmed at that moment so faster, and more considered, creative decisions can be made, which enhances overall production value.”

The Dejero system also provides additional flexibility. “The GateWay was key for two reasons,” says Cooper. “The vehicle isn’t just used for transmitting; it can roll up on any set and we can break out wireless mesh networks to create large-scale connectivity. It becomes an ultra-reliable rolling hotspot.”