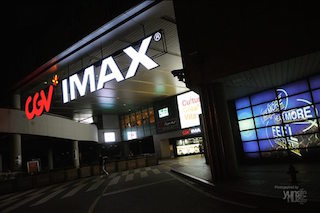 CGV and IMAX Corporation have announced a broad expansion of their longstanding partnership with an agreement to launch 17 new theatres around the world. The expansive agreement includes nine new IMAX theatres in South Korea — one of IMAX's fast-growing markets and home of its highest grossing screen worldwide — as well as theatres across CGV's global footprint, which includes Turkey, Vietnam, and Indonesia.

The agreement is the biggest theatre deal for IMAX in 2020 to date and marks a step forward as the global movie theatre industry seeks to reopen. South Korea is among the markets leading this charge, with 18 IMAX theatres currently open across the country. CGV's flagship location, CGV Yongsan, was the top grossing IMAX theatre in the world in both 2018 and 2019.

As a result of their 15-year partnership, CGV and IMAX now have more than 185 open or contracted theatres worldwide. In the past year, CGV has significantly grown its commitment to IMAX with agreements for 58 new theatres — including an agreement for 40 new theatres in China signed in June 2019. CGV is the largest multiplex cinema chain in South Korea and also has branches in China, Indonesia, Myanmar, Turkey, Vietnam, and the United States. It is the fifth largest multiplex theatre company in the world.

"CGV and IMAX both understand that, as audiences around the world return to theatres, they will want to see the remarkable slate of blockbusters ahead in IMAX," said Richard L. Gelfond, CEO of IMAX. "South Korea and Southeast Asia continue to be strong performers for IMAX and leaders in the global reopening of theatres, and this agreement further accelerates our growth in this key area of the world."

Several theatres included in the agreement will roll out with IMAX's most advanced theatre experience yet, IMAX with Laser. That follows the first laser system to be installed in South Korea (Gwanggyo) in January. The agreement includes joint venture, revenue share models in South Korea and hybrid models requiring no net capital commitment from IMAX in the other markets. Additional terms were not disclosed.