Can Movies be Archived on DNA? 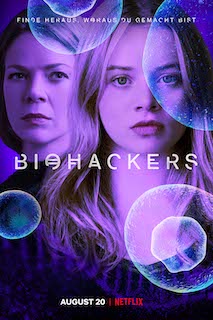 Can movies and TV shows be successfully archived on DNA? That question has been raised by an ad hoc working group of the international JPEG Committee. While that and many other questions remain unanswered, one thing is known: researchers recently stored an episode of the German Netflix TV series Biohackers on DNA.

For a century the challenge has been to find a medium to archive motion pictures and TV shows that was both efficient, durable and cost effective. For much of that century, the most reliable answer has been to archive on film. As Siegfried Foessel, head of the Department of Moving Picture Technologies at Fraunhofer IIS, and a member of the ad hoc group called JPEG DNA explains, “Film could be preserved for fifty to one hundred years and, under good conditions, even for five hundred years. In consequence, all archives put film reels on their shelves in a cooled environment. With the advent of digital cameras, digital production and digital projection, film became obsolete for image and movie workflows and during the direct commercialization process.”

Thus, film became an exotic foreigner in the movie industry and was too expensive as an archival medium because it requires specific handling for lossless storing of digital data. Various other methods were investigated to store digital data for a long time, without constantly consuming energy. But no one could really fulfill the specific requirements for long-term preservation of motion pictures.

“And now?” says Foessel. “A new idea came up. The medium with one of the highest densities of information is DNA. So, researchers investigated – not for the movie industry, but for medical applications – how to synthesize DNA molecules. And other researchers looked for new applications to use the DNA for data storage.”

That led to the storage of the Biohackers episode on DNA, which is essentially where things stand today.

The high density of information storage is not the sole advantage, said Foesssel. “DNA from previous lifeforms on earth – thousands of years old – have been found, not handled especially carefully and, yet can be read even today,” he said. “The suggests that the longevity of DNA is proven.”

All these aspects induced the JPEG committee to investigate if this new storage medium is a realistic solution for archiving digital data and the work continues. The JPEG DNA group has issued its first report, which can be downloaded here: http://ds.jpeg.org/documents/jpegdna/wg1n90023-REQ-DNA-based_Media_Storage_State-of-the-Art_Challenges_Use_Cases_and_Requirements.pdf

Also, this YouTube video explains how the process works and talks about the series Biohackers and how it is amplifying the ongoing research: https://www.youtube.com/watch?v=DMYgjOHgHxc