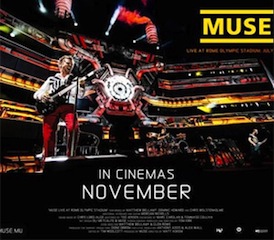 Serpent Productions recorded the Stadium rockers Muse concert in Rome's Olympic stadium in July this year in both HD and 4K simultaneously using Sony F55 cameras. The decision to post-produce a 4K-cinema version rested on whether it was at last possible to get a quality conversion at a low frame rate and in 4K. BTV Post successfully managed both using Snell's new Alchemist OD file-based standards conversion platform.

Alchemist OD was used for the entire conversion, which dovetailed with BTV's 4K Mistika post-production pipeline.

"This sets a new benchmark for the conversion of performance content for digital cinema, and films for television and DVD, without ever needing to slow down or speed up again," said BTV Post CTO Jon Lee. "Working closely with Snell's engineering team, we have come up with workflows to get a low frame rate conversion that is virtually indistinguishable from the original content."

The Muse concert will be released in U.K. cinemas in 4K on November 5.