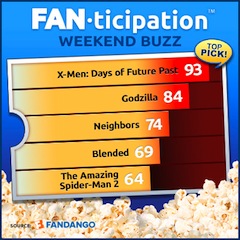 According to Fandango, X-Men: Days of Future Past is pacing to be the biggest X-Men movie opening in Fandango history, overpowering the company’s previous record-holder, 2006’s X-Men: The Last Stand.

Days of Future Past is currently getting more than 90 percent of the company’s Memorial Day Weekend ticket sales, and topping Fandango’s Fanticipation movie buzz indicator, with 93 out of 100 points.

“Fans will be awestruck by the film’s non-stop action,” says Fandango fangirl Tiffany Smith, “and Jennifer Lawrence turns Mystique into a relatable anti-hero who really drives the story. The all-star teaming of the film’s past and future cast members, plus the fun fan favorite cameos, make it one of the summer’s most highly-anticipated blockbusters.”

“I think one of the great things about X-Men, from the comic book right to the movie, is that the female characters are strong,” says Jackman.  “I run into people all around the world and for them, it’s not just fun and cool, they related to these characters.”

The entire Weekend Ticket interview is available for viewing at Fandango.com/WeekendTicket.