THX has entered into a strategic partnership with China Film Giant Screen, a subsidiary of China Film Group, for both technology and business collaborations. 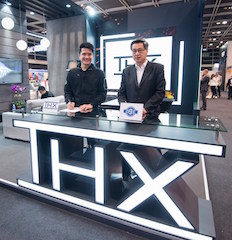 Min-Liang Tan, CEO of THX said, "We are delighted to establish this strategic partnership with CGS to bring the very best cinema experience to viewers in both China and the US, the two largest cinema markets in the world. THX and CGS are respective technology leaders in cinema, and we are confident that the partnership will help bring superior audio and visual entertainment experiences to audiences."

Lin Minjie, chairman of CGS said, "We share the same vision with THX to provide the best viewing experience to customers. The collaboration between CGS and THX enables both companies to promote their respective technological edges at the theaters. We believe that our partnership with THX will further elevate the status of the China cinema technology in the international arena while bringing the best in class cinema technologies to the world."

The strategic partnership between THX and CGS is expected to enable both parties to work together over the next three years to secure commitments from exhibitors to roll out a target of 400 screens worldwide featuring jointly developed next generation cinema experience. THX and CGS are also committed to developing new offerings for exhibitors, which will be announced early next year. The partnership will also enable THX and CGS to produce co-marketing and publicity events that will drive box office sales for studio and exhibitor partners.