The Chinese electronics company TCL has renewed its partnership with the Chinese Theatre in Hollywood. Under this extended partnership, TCL will apply its technology portfolio and entertainment expertise to enable richer, more immersive experiences at one of the world's most renowned theatres, just as it has done so since 2013, to contribute to the theatre's legacy. 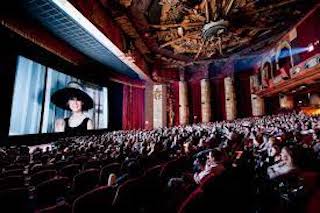 "This is a monumental day in our history as we continue this unique relationship with such a top and innovative electronics giant," said Elie Samaha, chairman of TCL Chinese Theatres. "The milestone relationship between TCL and the Chinese Theatre has to date allowed us to do many of the upgrades and preservation projects we earmarked from day one of ownership."

Since its first cornerstone was laid 96 years ago in 1927, the Chinese Theatre has been a longstanding cultural icon at the heart of Hollywood. Its rich history is one brimming with marvel and awe, showcasing the best of Chinese and International cinema, distilling the ingenuity of countless creative minds, and weaving them into the fabric of its curtains. Visitors can appreciate the theatre's influence by examining the handprints and footprints in the forecourt left by Emma Stone, Jackie Chan, Marilyn Monroe, Norma Talmadge and 238 international celebrities throughout the century, each adding to the theatre's continuing story.

Given such a unique reputation, TCL understood that the theatre's success is tied to its cultural weight. Conversely, the theatre sought an extraordinary partner, one with the expertise and capability to maintain and build its legacy. It ultimately entered a naming rights partnership with TCL in 2013, recognizing the brand for its innovative prowess and technology excellence. As a part of the collaboration, the TCL brand was added to the theatre's name.

As a leader in consumer electronics and home theatre systems, TCL has applied its decades of cinematic research to helping the theatre thrive. In the same year the partnership began, TCL played a pivotal role in building the world's largest Imax screen into the space, elevating the level of immersion the theatre could offer. This was one of the largest projects the Chinese Theatre has ever undertaken and its first major expansion in 85 years. Most importantly, the Imax expansion was designed to dovetail with the theatre's existing atmosphere and decor, preserving the theatre's history.

To celebrate the renewal of the partnership, TCL has collaborated with popular social media platforms to place the viewers in the limelight. With a special camera filter, users can experience a virtual handprint ceremony. The captured handprints will be shown on the TCL Chinese Theatre's LED display.