Researchers at Britain’s Gower Street Analytics have released a new report that shows that, as theatres are allowed to open, some cinema markets are slowly beginning to rebound in the wake of the pandemic. This past weekend marked one year from the first closure of the China’s cinema market due to the COVID-19 virus. That market closed just ahead of its lucrative Chinese New Year holiday in 2020 – a holiday that this year falls on February 12, due to the lunar calendar on which it is based. A year on and currently China is the most robust international market, tracking 41 percent ahead of 2020, even before reaching the closure period of last year, and on par with the average of the previous three years: 2017-2019. 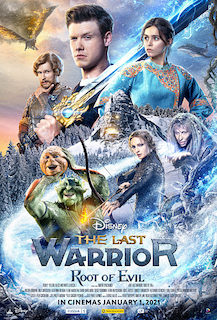 Among Comscore-tracked markets, only Taiwan is also ahead of 2020 at this stage (+11 percent), although it is tracking 28 percent behind the three-year average. Most of Western Europe remains largely closed, with Spain a rare exception. However, Eastern European major Russia stands in stark contrast with 88 of cinemas open by market share and 2021 business tracking just 33 percent behind 2020 (and 27 percent behind the 2017-2019 average). This is largely thanks to success of local sequel The Last Warrior: Root of Evil ($26 million), which is now the fourth highest grossing local title of all-time in Russia and had entered the top 15 for all films. The robust market most recently welcomed Pixar’s Soul at number one this weekend ($3.4 million) with the fifth best opening for Pixar in Russia (and second best for a non-sequel, behind Inside Out).

Other markets tracking better than most against 2020 include Japan (-27 percent) and Singapore (-30 percent). Just over three weeks into the year and Gower Street already estimates the global box office to be tracking $1.87 billion behind the three-year average (2017-2019). The domestic market is already $680 million behind the average, with California accounting for 17 percent ($116 million), more than any international market except for UK/Ireland. The strongest performing domestic sub-market (U.S. state or Canadian province) is Canada’s Northwest Territories, tracking 42 percent behind 2020. The best performing U.S. states are South Dakota and Wyoming, which, like Canada’s Newfoundland and Labrador, are tracking approximately 74 percent behind last year. The total domestic market is 93 percent down year-on-year. 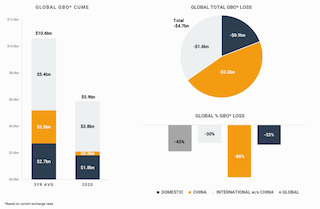 Gower Street is currently estimating the domestic market to gross approximately $6.1 billion in 2021. UK/Ireland’s loss of approximately $121 million already in 2021 compared to the three-year is the biggest in the international market ahead of South Korea ($107 million).

In total for 2020, Gower Street estimates that global box office finished at approximately $12.4 billion, down from a record $42.5 billion in 2019. The result was also 70 percent behind the average of the previous three years (2017-2019). International box office (including China) is estimated to have finished around $10.2 billion, down 66.5 percent against the three-year average.

The full report is available on the Gower Street website at http://www.gower.st.