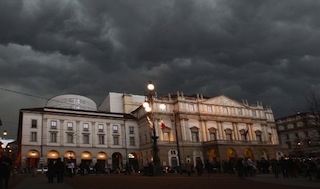 Opening night at Teatro alla Scala will be broadcast in high definition by satellite to audiences in cinemas worldwide. The event takes place annually on December 7, the feast day of Milan’s patron saint, Saint Ambrose. This year, La Scala has chosen the Verdi favorite La Traviata, conducted by Daniele Gatti, to kick off the 2013-2014 Season.

The broadcast to cinemas is made possible by Radio Televisione Italiana, the Italian national broadcasting company and by Rising Alternative, a leading distributor of classical music programs to cinemas.