A new report from the analyst firm Gower Street shows that nearly a quarter (23 percent) of all U.S. movie theatres have stayed closed since March 2020. These locations generated a combined yearly box office of $1.8 billion on average in 2018 and 2019. The report makes clear that the situation will remain difficult until quality movies are available on a regular and consistent basis. 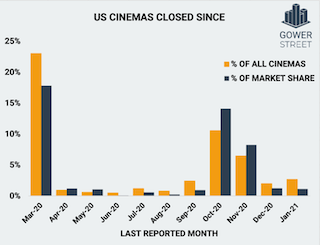 According to the report, which was written by Thomas Beranek, last year over the March 13-15 weekend most theatres were still open, but the threat of COVID-19 was already causing the lowest three-day weekend result since September 2000. March 15 saw closure orders in New York City and Los Angeles. Within two days fewer than 40 percent of domestic theatres were operating. A week later it was under four percent, before hitting rock bottom in April with one percent. This number started to improve slowly from the end of May up to 19 percent of movie theatres open by market share in mid-August.

The re-opening accelerated from that point in the build-up to the release of Tenet on September 3, when 56 percent of movie theatres by market share were open. This positive trend peaked at the end of the month with 61 percent. It stayed there for just two weeks before the triangle-of-troubles hit: lack of product, re-closing of movie theatres, and a new or further rise in COVID-19 cases

By the end of the year the number of movie theatres open by market share had fallen to 38 percent.

Since the beginning of 2021 the situation has improved slightly. A slow re-opening, up to 43 percent as of the middle of February, has taken place.

Although fewer than half of all U.S. movie theatres are currently open, most have at least taken the chance to re-open once or more after being forced to close last year. However, many have never re-opened their doors to audiences since they turned out the lights in their auditoriums in March 2020.

To understand the structure of closure and re-opening Gower Street Analytics utilized data from our partners at Comscore. Of the 5,253 movie theatres they tracked across the U.S. in 2020, we took the last reported day of each individual cinema as most recent day of operation. 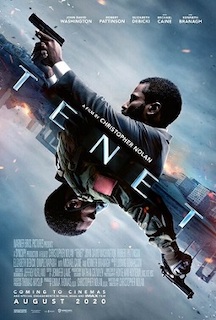 This observation is even more visible within the nine U.S. states that already reached a significant majority, 80 percent by market share, of movie theatres in operation. This represents Stage 1 of Gower Streets Blueprint to Recovery, a base from which to build on. As of February 22, the following states are at or above this level: Alabama, Arizona, Iowa, Mississippi, North Dakota, South Dakota, Utah, Wisconsin and Wyoming. In each of these nine states the market share of the movie theatres closed since March is significantly lower than the percentage of total locations those theatres represent in the state. At the same time, the market share of theatres currently open in these states outstrips the percentage of total locations represented by double digit percentage points.

The described disparate allocation of the market share of open theatres and percentage of physical sites operating correlates with the number of screens these locations have. The movie theatres that were closed for the last 11 months entirely generally have a lower number of screens. In fact, more than half of them (55 percent) have five or fewer screens. This is significantly higher than the norm (42 percent) of all movie theatres in the U.S. Of the movie theatres currently open only 32 percent have five or fewer screens.

Looking at the nine states already at Stage 1 of their Blueprint to Recovery, this phenomenon is even more clear. Movie theatres with fewer than five screens represent 75 percent of the locations that have remained closed since March across all these states, while the average among all theatres there is just 52 percent. Of the current open houses, only 39 percent have five or fewer screens. Single screen theatres are especially evident amongst the share of the long-closed movie theatres. They account for half of all movie theatres in these nine states that have not opened since March 2020.

Based on this data, it is evident that primarily the lower grossing movie theatres and the ones with fewer screens are those that have not operated at any point since the pandemic forced them to close. Given the restrictions and security measures in place movie theatres with more screens often have a wider range of tools to maintain their business. Moreover, movie theatres that even in pre-pandemic times were generating box office at the lower end of the range, find it even more challenging to achieve a critical amount to make an opening worth trying with the limited supply of attractive content.