The trailers were produced in partnership with China's multi-screen entertainment and media giant Youku Tudou, and premiered at a live event as part of the Youku VR platform launch on May 11. The live-action sci-fi series Raven and animated fairytale Storybox are the first 360° narrative projects developed by Rascali, which launched in November 2015 as the VR content lab division of VR game developer Reload Studios, creators of World War Toons. 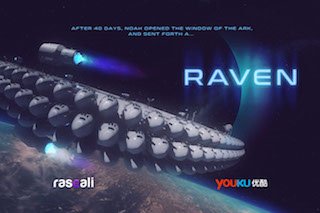 “When we launched our new Youku VR platform, we wanted to have examples of compelling content that showcase the potential for episodic programming in virtual reality. We turned to Rascali because we knew that they had the experience to bring Hollywood caliber production quality and storytelling to VR projects,” said Ryan Cheung, vice president of finance of Youku Tudou.

“Aligning with an online video leader like Youku Tudou brings us closer to our vision of becoming a premium content studio in the global VR marketplace,” said head of Rascali, Phillip Moses, “These trailers are just the tip of the iceberg, and we look forward to expanded partnerships with additional production/distribution partners to further develop this next generation of episodic programming.”

In the sci-fi saga Raven, viewers follow a team of astronauts on their quest throughout the galaxy to find a new home for humanity, which has turned the Earth into a toxic environment. The otherworldly adventure allows viewers to travel through uncharted space with 360° views of the galaxy and the Earth below.

In the trailer for the animated series Storybox, viewers become immersed in whimsical fairytales via humorous and lighthearted retellings of classic bedtime stories. Each story places the viewer inside a theater presenting wraparound tales that appeal to kids of all ages and the young at heart.

Rascali is a division of Los Angeles-based Reload Studios.