Cinemagoers can now buy tickets directly on dedicated studio movie websites such as the site for the upcoming film Mission: Impossible - Fallout. Created by Powster, these ticketing portals are activated across all social media.

Powster creates movie websites for all six major studios and launches more than 170 sites every month. After successful Beta testing, Powster has now enabled full ticketing on these movie websites so that cinemagoers can complete the entire purchasing journey without redirecting the user to a third-party website. 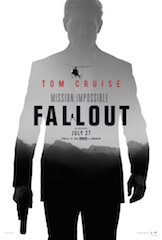 Powster’s ability to launch full ticketing at scale is in part related to movieXchange’s MX Tickets service, Vista Group’s new global ticketing platform allowing ticket sellers to integrate with and transact against all exhibitors. By integrating the full payment process into the movie site, Powster has improved the user journey of purchasing a ticket letting users purchase directly on the movie website, making going to the cinema easier than ever.

The Powster ticketing model is unique to the industry. According to the company, payments are deposited directly with the theater, eliminating the administrative hang-ups previously associated with third-party ticket sales. For studios, Powster ticketing ensures visibility and measurement of the entire purchasing process culminating in actual ticket sales.

Powster CEO, Ste Thompson says, “We have researched into the best solution for both movie theaters and movie distributors. Our solution equally benefits both parties by enabling the movie studio to optimise their advertising and the movie theater to retain the customer.”

Powster ticketing can be integrated into social platforms, such as Facebook, Snapchat, and Instagram, so users can complete their ticket purchase without leaving the site. Full ticketing has also been built into Powster’s Facebook Messenger experiences, where users can set reminders, watch movie trailers, and organize showtimes with friends all without leaving Messenger.