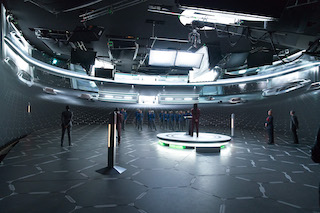 In addition to this stage for long-term film and television projects, Pixomondo also recently opened the Stage 6 virtual production volume for short-term engagements in Toronto’s Port Lands district; and the world’s largest LED stage in Vancouver, with 23,000 square feet of stage space, which is currently being used to film Netflix’s live action Avatar: The Last Airbender. All three of Pixomondo’s Canadian stages are built in partnership with rental company William F. White International Inc.

"This has been a landmark year for Pixomondo as we made a number of significant moves to make virtual production central to our portfolio of production services,” said Pixmondo CEO Jonny Slow. “With Brompton onboard as a key technology partner, we were able to deliver an ambitious and innovative solution for the producers of Star Trek: Discovery, as they embraced LED volume use for the first time with Season four. We look forward to continuing to work closely with Brompton, as we move into ever more exciting frontiers together.”

“We’ve been working with Pixomondo for several years, and we’re glad that Brompton processing continues to be a key part of their arsenal as they introduce new shows and crews to the benefits of virtual production,” said Adam Callaway, technical solutions manager, Brompton Technology. “Pixomondo has been a true industry leader in ramping up virtual production across Canada, and it’s thrilling to have Brompton technology contribute to the ongoing innovation of such a storied franchise as ‘Star Trek.’”

Pixomondo has been leading the visual effects for Star Trek: Discovery since it began in 2017 and earned an Emmy nomination for visual effects on its second season. Star Trek: Strange New Worlds, a new upcoming series in the Star Trek universe, also recently wrapped production on Pixomondo’s Toronto stage, and will premiere in 2022.