Goldcrest Post helped tell the story of one of the most remarkable political careers in recent American history in providing post-production services for the new HBO documentary Pelosi in the House. The facility handled both picture and sound finishing for the nearly two-hour film, directed by the House Speaker’s daughter, acclaimed documentary filmmaker Alexandra Pelosi.

Led by senior colorist Evan Anthony and supervising sound editor/re-recording mixer Mike Suarez, the post team faced numerous challenges in finalizing the look and sound of the film, which was shot cinema verité style and spans more than three decades.

Debuting on HBO this month, Pelosi in the House goes behind the headlines as it tracks Nancy Pelosi’s life in public office from her election to Congress in 1987 and becoming the first female Speaker of the House in 2007 through the 2020 election and President Biden’s inauguration. Following Pelosi at both work and home in real time during consequential political moments in the country’s recent history, the film offers a unique look at American politics through her efforts on the Affordable Care Act, the COVID-19 relief package and two impeachments, as well as a record of the events of January 6, 2021, following Pelosi and other lawmakers at a secure location as the crisis unfolded.

Anthony and Suarez worked closely with Alexandra Pelosi and picture editor Geof Bartz, ACE, throughout the post-production process, which was delayed, in part, due to the COVID-19 lockdown. “It took four and a half years,” Pelosi states. “You must understand that this film was shot on many different cameras over decades. Plus, we added poor quality archival footage that was almost impossible to make look good. But Evan worked his magic. This film was also a mixer’s nightmare. There was no direct sound, just on-camera mics. Mike really had to pull a rabbit out of his hat. Goldcrest is a paradise for filmmakers.” 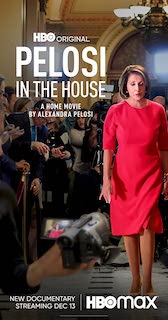 During final color grading sessions, Anthony was tasked with achieving consistency from imagery shot over decades under divergent conditions with multiple cameras. “Alexandra does her own shooting, capturing events on the fly with small, portable cameras,” explains Anthony, who previously graded Pelosi’s 2017 HBO documentary The Words that Built America. “Alexandra’s focus was on storytelling, so she wasn’t always working with the best lighting or micing. That presented numerous creative and technical hurdles during post finishing.”

Bringing uniformity to the material was challenging not only by the varying nature of the source material, but also by the film’s unusual narrative style. “Unlike most documentaries, there are no sit-down interviews. Everything is life as it unfolded over 35 years,” Anthony explains. “We weren’t aiming to create a uniform look because every scene was tremendously different. It was about normalizing everything and allowing it to flow naturally.”

In addition to color grading, Anthony performed digital restoration to remove noise and other artifacts from archival footage that originated from old or poor-quality sources. Suarez faced similar issues in extricating clear sound from recordings made under less-than-ideal conditions. “I was surprised by how successful we were in delivering full dialogue and limiting the need for subtitles,” she says.

Suarez coordinated his work with Bartz and his picture editing team, providing them with temp mixes as they refined sequences. “I started handing over rough mixes early in the process for Geof and his crew to listen to,” he recalls.

Bartz agrees, saying that Suarez did an excellent job in making marginal dialogue sound clear. “He excelled, especially with off-mic stuff, which was part of almost every scene,” he says. “He carried that attention to detail through to the final mix, including the beautiful way he integrated the music. I can’t compliment him enough and I loved working at Goldcrest. It has a family feel that makes for a great place to hang out while finishing a movie.”

Along with the creative and technical challenges, both Anthony and Suarez found the project personally rewarding. “I gained a lot of insight into Nancy Pelosi and especially admire the way she responded to the events of January 6th,” Anthony says. “During the attack—and later when the Capitol was back under the government’s control—her concern was the health and wellbeing of other people. When she spoke with Mike Pence, her first questions were, ‘How are you? How's your family?’ She was also worried about the safety of her staff. Throughout the crisis, she took control and worked on solving the problem. She showed herself to be a true leader.”