National CineMedia has named Rick Butler chief digital officer. In his new role, Butler will lead the company’s digital products and data initiatives to deliver both innovative consumer experiences and new ways for brands to connect with movie audiences.

Prior to this, Butler had been working with the NCM digital team as a consultant as president of Playa Vista Consulting, serving as the visionary behind NCM’s new Noovie.com movie search and discovery destination. 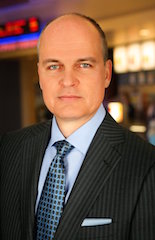 Butler has extensive experience in the digital entertainment space and is perhaps best known as the executive behind Fandango, building that $500 million e-commerce revenue channel both as chief operating officer, and later as executive vice president and general manager following the company’s acquisition by Comcast.

Butler will be based in Los Angeles and will report to NCM CEO Andy England, who noted that, “Rick is an expert in B2B and B2C products and platforms and has a terrific track record of building award winning web and mobile applications. He’s the right man for the job of taking our Noovie digital ecosystem and data initiatives to the next level, creating exciting new content, commerce and gaming products like Noovie ARcade, and Fantasy Movie League designed to reach movie audiences. NCM’s digital future looks bright indeed.”

Butler also previously served as chief executive officer of Outbox Enterprises, an AEG/Cirque du Soleil joint venture that provides web and mobile box office solutions as well as back office systems for some of the largest concert and sporting venues in the world. His past experience also includes roles as senior vice president operations with FinancialPrinter.com, the first fully web-based national financial document services company; as Vice President, Operations with Bowne & Co., Inc., the world’s largest financial printing firm; and several roles with R.R. Donnelley & Sons, a global provider of integrated communications drawing on a range of digital and conventional technologies.