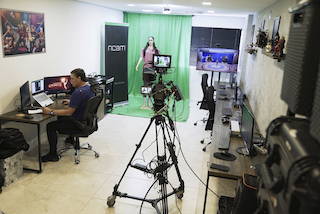 “As virtual production picks up steam, the needs of creative teams are changing rapidly,” says Nic Hatch, CEO of Ncam. “Each of these new locations is not just an office and training site but a fully-fledged studio, giving people access to the tech they need to blend live action and computer graphics.”

In addition to supporting the creation of new productions, both the Prague and Rio de Janeiro studios are set to act as training grounds for educational partners and provide a location for in-house experts to demo new Ncam tech and features.

“The number of smaller productions has grown exponentially in the past year, and we saw a real need for a new studio and training space in Eastern Europe,” says Vojtěch Horký, head of the Prague facility and a champion of virtual production techniques. “As the world leader in camera tracking, we aim to bring the tech to a wider audience through a localized approach.”

Sergio Bourguignon, head of the Brazilian facility adds, “We also want our fast-growing customer base to understand that we are more than just a manufacturer. With this expansion, we are better positioned to provide local support, advice, and creative inspiration for the long term, whether you’re a filmmaker, broadcaster or anything in between.”