The City of Milwaukee wants someone to restore the historic Villa/Ritz Theatre and re-open the now vacant building as an entertainment venue. “It is our hope that the movie theatre will be a catalytic development,” said Angelique Sharpe, of Havenwoods Neighborhood Partnership, which manages the Villard Avenue Business Improvement District. “We would like to see it continue on with its long tradition of being able to house all kinds of entertainment such as cinema and film, performance, comedy, music, and dance.” 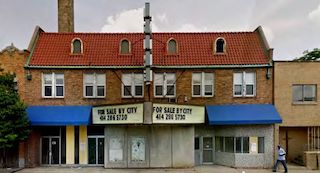 Constructed in 1926 by Michael Brumm to be an independent cinema, the 840-seat Spanish Colonial-style theatre was used primarily as a movie theatre through a variety of owners, up until 1986 when Marcus Theatres closed it.

Tanya and Herman Lewis bought the building in 1988 and ran it as both a first and second-run theatre and community playhouse for several years before ceasing operation in 1995. Since then, the building has been used as a salon, a church, a bookstore, and a school.

The city acquired the building through a tax foreclosure in 2015.

The renovation of the building is projected to cost nearly $2 million with the possibility of Department of City Development incorporating alternative financing such as historic tax credits, tax incremental financing, and other financing sources.

Alderman Ashanti Hamilton who represents the Villard Avenue business district said that he was confident qualified developers would step up to help breathe new life back into the neighborhood landmark.

“The impending redevelopment of the historic Villard Theatre is expected to be one of the most significant investments on Villard Avenue, but also for the far northwest side of Milwaukee, and the city as a whole,” Hamilton said. “I can personally remember a time where this theatre was a destination that brought movie lovers from all parts of Milwaukee, both young and old, to visit Villard Avenue. This is a significant step for the commercial corridor, the neighborhood, and the entire city.”